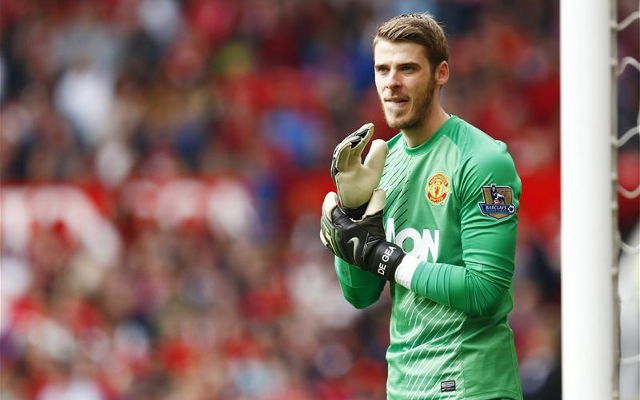 Real Madrid are believed to have made an initial bid for Manchester United goalkeeper David De Gea, offering £14.5 million plus Fabio Coentrao for the Spain international.

It became apparent this weekend that Louis van Gaal knows he has his work cut out to keep the star stopper at Old Trafford.

The goalkeeper appeared to say farewell to the four corners of the stadium ahead of United’s 1-1 weekend draw with Arsenal—a gesture some have interpreted as a ‘goodbye’ to the Red Devils fans.

Similarly, van Gaal acknowledged after the match that it would be difficult to keep hold of the keeper should Real Madrid look to take him back to his homeland.

“He is Spanish, he is Spanish international and now a Spanish club is coming,” the Dutchman admitted, speaking to Sky Sports after the Premier League encounter.

“His girlfriend is Spanish, his father and mother come every week or every two weeks here. So it is difficult.”

While up until now any De Gea-to-Madrid transfer talk has been purely hypothetical, the club have now made a concrete offer for the goalkeeper, according to the Metro.

Coentrao is a long-term target of United, but Marca [via the Daily Mail] suggest that van Gaal would rather receive an entire transfer fee of £29 million, rather than accept a reduced price and the Portuguese international.

Indeed, United are well-stocked in the left-back berth with players such as Luke Shaw, Marcos Rojo, Daley Blind, Tyler Blackett and Ashley Young all having featured there this term.

Jose Mourinho is also believed to want his former Real charge Coentrao with him at Stamford Bridge. The Metro report that the Chelsea boss is looking to conclude a £14.5 million deal for the full-back as a replacement for transfer flop Filipe Luis.