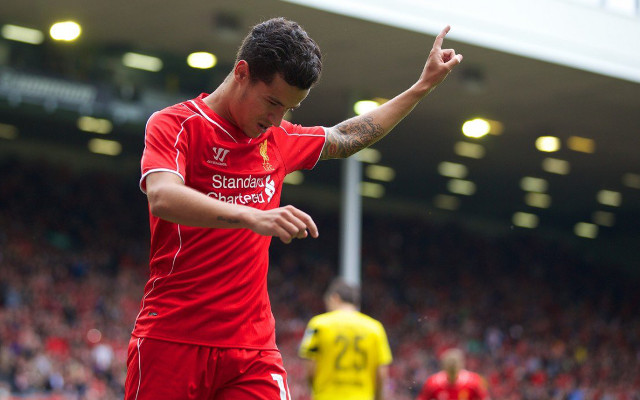 Philippe Coutinho walked away with a host of individual awards at Liverpool’s annual end of season ceremony on Tuesday night, with the Player of the Season prize the most prestigious one of them all.

The Player of the Year award 2015 goes to Philippe Coutinho. #LFCPlayersAwards pic.twitter.com/swglbtyTwo

The Brazilian playmaker has been in brilliant form for the Reds during the campaign, scoring five and assisting five in 34 Premier League apperances and wins the award after being voted for by his fellow team-mates at Anfield.

Coutinho played a significant role in the club’s route to the semi-final of the FA Cup as he scored three times in six games, including vital winners against Bolton Wanderers and Blackburn Rovers. He also found the net against Aston Villa at Wembley last month, but unfortunately he couldn’t prevent the Reds from crashing out of the competition.

With the future of Raheem Sterling, who was booed upon receiving his Young Player of the Year award, in doubt following reports of him wanting to leave, Kop supporters will hoping that Coutinho remains at the club and continues to develop into a world class player.

Take a look at the Brazilian collecting the Players’ Player of the Year award from Reds captain Steven Gerrard:

Watch as Philippe Coutinho receives the First Team Players’ Player of the Year at the #LFCPlayersAwards https://t.co/vv18HLV6Ky