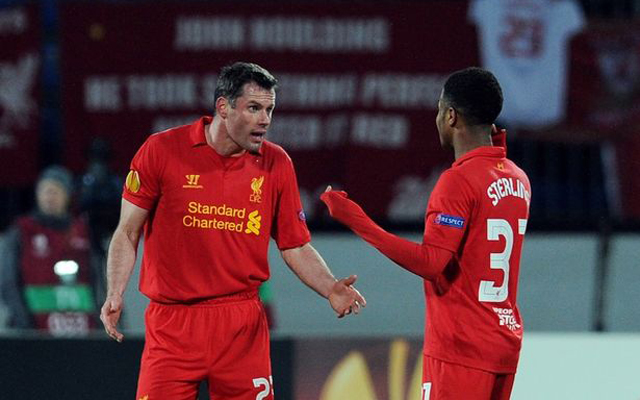 Liverpool legend Jamie Carragher has told wantaway star Raheem Sterling to keep his mouth shut in the face of rumours he is leaving the club, reports Sky Sports.

The youngster is thought to be annoyed about how the club have treated the situation, and thinks that more should have been done to protect him from the press. As a result the 20-year-old is set to tell the Anfield hierarchy that he wants to leave in the summer, despite having another two years left on his current contract.

Carragher played for the Reds for 17 years, making 737 appearances in that time. He is unhappy with the lack of loyalty being shown by the England international, and thinks that he should stay quiet on the whole situation. There has been a significant drop off in performances from the winger while the rumours over his future have grown.

He said: “For a 20-year-old kid to be taking on Liverpool Football Club over a contract. To the pit of my stomach that just winds me up, it angers me. The lad is from London and he obviously wants to go back home. It might not be about money. It may be about trophies or playing in the Champions League.

“If it’s about trophies, Liverpool had a chance for a trophy this year, in the FA Cup semi-final at Wembley against Aston Villa. Where was Sterling? If you want trophies, they don’t get given to you, you have to earn them, you have to play well in big games. What did Liverpool do in the Champions League? Nothing. What did Sterling do? Nothing.”

He concluded: “To do what he’s done now. There’s nothing worse than that. You keep your mouth shut – get on with playing football.”

With Steven Gerrard leaving Merseyside for MLS side LA Galaxy in the summer and Luis Suarez having been sold to Barcelona last year, Reds fans will be hoping that Sterling isn’t the latest key player to be leaving.