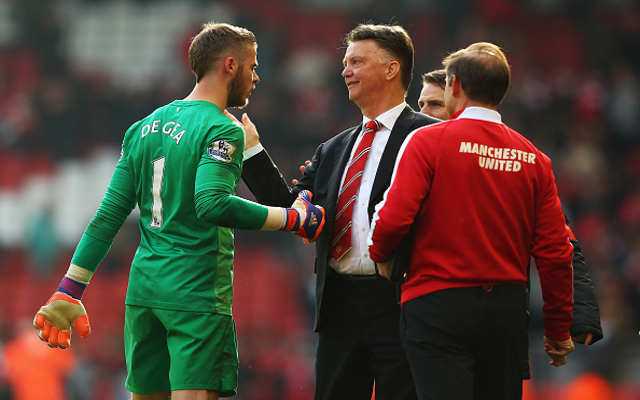 Manchester United manager Louis van Gaal remains confident that the club will be able to keep hold of David De Gea despite rumours of Real Madrid’s interest in luring the Spanish goalkeeper back to La Liga.

Speculation has been rife all season that the 24-year-old will make the move to Los Blancos in the summer and van Gaal seemed resigned to losing his number one following United’s 1-1 draw with Arsenal last week as he admitted for the first time that De Gea could depart.

But it appears that the Dutchman has had a change of heart and has insisted that the Spaniard will be at Old Trafford at the start of next season:

“I believe still that David de Gea shall stay.” van Gaal told reporters ahead of his side’s game with relegation threatened Hull City on Sunday afternoon (via The Telegraph).

De Gea has been in sensational form for the Red Devils this season and has single-handedly won them points at various points of the campaign with the visit of Liverpool to Old Trafford last December the standout fixture.

He underlined his status as one of the best stoppers in the league with a series of fine saves to deny Raheem Sterling and Mario Balotelli and prevent the Reds from scoring that day.