Manchester United star Antonio Valencia has hinted that Radamel Falcao won’t be extending his time at the club by thanking him for his friendship.

The Colombian has been poor during his loan from AS Moncao at Old Trafford. He has scored just four times in 29 matches, albeit with 12 of those appearances coming from the substitutes’ bench. This has led to the assumption that the Red Devils won’t attempt to either extend his temporary deal or buy him outright in the summer.

However, there has been no confirmation as of yet. Even so, this post on Instagram by his teammate gives a big hint. Valencia said to the 29-year-old: “Thanks for your friendship, being the person that you are great companion. We love you brother.” 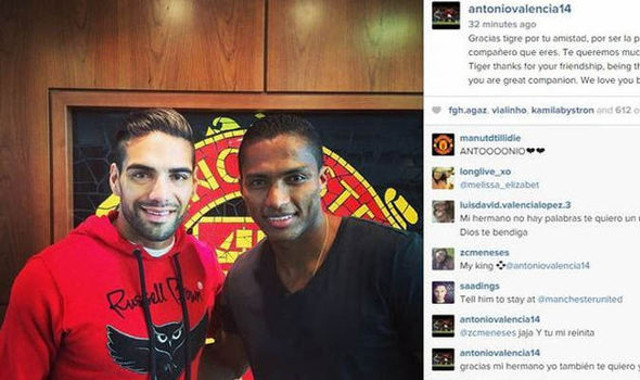 If this is indeed hinting that the striker is departing Old Trafford it likely means that United will be buying a different striker. They are certainly in need, with Wayne Rooney the only forward to have actually impressed this season despite playing in midfield at times. Robin van Persie has been injured for long periods and showing signs of his 31 years, while 19-year-old James Wilson doesn’t appear to have the trust of manager Louis van Gaal.