Norwich City have clinched promotion back to the Barclays Premier League at the first time of asking after beating Middlesbrough 2-0 in the Championship play-off final at Wembley on Bank Holiday Monday.

The Canaries went into the game as slight underdogs but found themselves with a two-goal lead after just a quarter of an hour. They went on to see out the rest of the game with little concern to win the richest game in football. 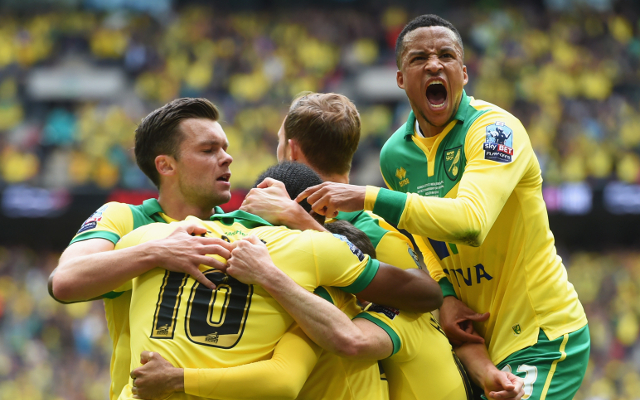 Both sides came close to an opener within seconds of each other as Bradley Johnson and Jelle Vossen had brilliant efforts comeback off the crossbar in the early stages of the first half.

Norwich settled the quicker of the two and took the lead in the 12th minute as Cameron Jerome took full advantage of some weak defending from the Boro players and beat Dimitrios Konstantopoulos at his near post.

Three minutes later, highly-rated youngster Nathan Redmond doubled the lead as he slammed the ball past the Boro keeper to round off a brilliant passing move to give the Canaries a dream start at Wembley.

Boro, who had been rock solid defensively throughout the season, looked shell-shocked with the start they made and struggled to create many clear cut chances for the rest of the half.

They needed a fast start to the second period but couldn’t get danger-man Patrick Bamford into the match and as time ticked away it became increasingly unlikely that they could force the goal to get them back into the game.

City ran out comfortable winners and can look forward to games against the likes of Chelsea, Manchester United and Arsenal in the Premier League next season.