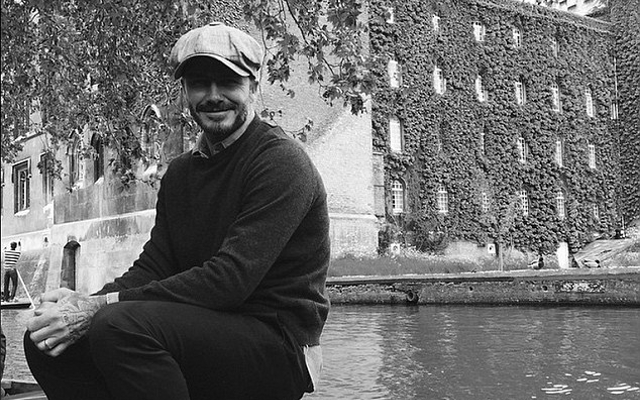 Former Manchester United and Real Madrid star David Beckham spent the Bank Holiday Monday with the rest of his family in the beautiful city of Cambridge and even got to meet legendary physicist Professor Steven Hawking, Mail Online reports.

Beckham, who celebrated his 40th birthday at the start of the month, was present with a large number of family members including wife Victoria and son Brooklyn as they took in the sights on a punting trip down the River Cam.

The former England captain appeared in one punt with his two other boys Romeo and Cruz while Victoria took another boat with their three-year-old daughter Harper.

With news of the Beckham clan in town, tourists and residents alike looked to catch a glimpse of the celebrity couple and the family, which in turn led to news of their visit to Cambridge all over social media.

‘We crashed into #DavidBeckham on a punt’ in Cambridge http://t.co/rgrtiNbo6i pic.twitter.com/7sjbHjL1fM

The Beckham’s punting today on the cam #beckhampunting #cambridge pic.twitter.com/PUasYz2Vvo

What an honour to meet Stephen Hawking. Such an inspiring afternoon.