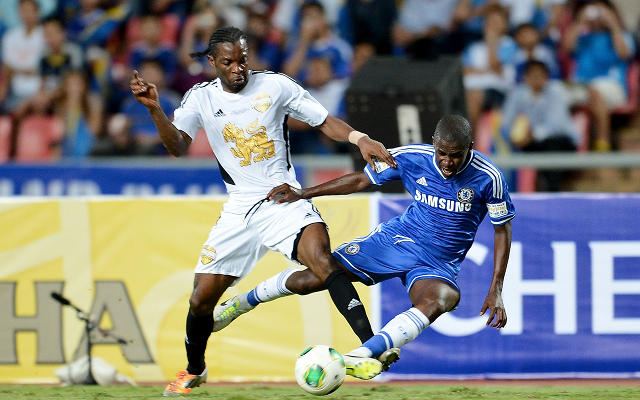 Chelsea winger Gael Kakuta finally looks to be set for a permanent deal away from the club, with Sevilla having agreed a four-year deal for the former prodigy.

L’Equipe report that the Rojiblancos have approached Jose Mourinho’s side and are looking to come to an agreement to acquire the player.

According to the Express, a deal has been agreed, with Kakuta understood to have signed a four-year-deal at the Ramon Sanchez Pizjuan.

The Franco-Congolese left winger is out of contract this summer, and talks over a new deal at Stamford Bridge have not been forthcoming.

The 22-year-old generated controversy seven years ago when Chelsea signed him from Racing Club de Lens. The player was banned for four months and both he and the club received a fine due to the teenager breaching his contract to move to Stamford Bridge.

In the intervening years he has struggled to live up to the ‘wonderkid’ tag that accompanied him to West London from the Stade Bollaert-Delelis.

He has only managed six Premier League appearances for the Pensioners since his move, and despite numerous loan spells — at Fulham, Bolton Wanderers, Dijon, Vitesse Arnhem, Lazio and, latterly, Rayo Vallecano — has seemingly not done enough to extend his stay at Stamford Bridge.

The winger at least impressed at Rayo this term, scoring four goals and contributing six assists in 23 La Liga appearances.