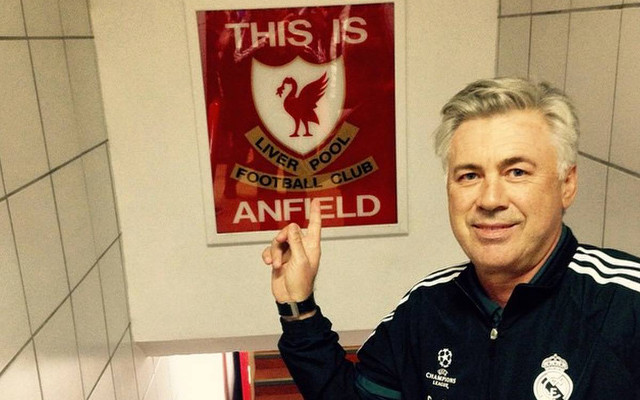 Despite reports earlier this week claiming that Brendan Rodgers’ job was safe, Liverpool are rumoured to have made contact with Carlo Ancelotti over replacing the Northern Irishman following his Real Madrid dismissal.

The Independent reported that Brendan Rodgers was set to be informed at the end of season review with the Reds’ owners that, despite the humiliating final day of the season defeat to Stoke City, his position at Anfield is safe. However, reports from Spain suggest otherwise.

A trophy-less campaign at the Santiago Bernabeu saw president Florentino Perez announce the termination of the Italian’s contract two days after the La Liga season had ended, and Spanish newspaper Marca claim that the Italian is not short of offers. A return to AC Milan is rumoured, along with interest from the Premier League, including West Ham United.

Ancelotti, however, [in quotes from the Daily Mail] said that he planned on taking a year-long sabbatical to allow him to finally undergo cervical spinal stenosis surgery, which had been put on hold as a result of his position with Los Blancos.

Nonetheless, the report claims that if there’s one team that could persuade the former Chelsea boss towards an instant return to the dug-out – it would be a side from England’s top flight. But, believe it or not, it wouldn’t be the Hammers.

Liverpool, given the huge history of the club, which the Italian himself has admitted to having an affection of, could be the only side capable of changing Ancelotti’s mind over a break from the game, Marca suggest.

Before Liverpool’s Champions League clash with Real Madrid in 2014, Ancelotti spoke of his love for the Merseyside outfit.

“I followed Liverpool from 1984 when I faced them with Roma in the European Cup final and we lost on penalties,” the 55-year-old was quoted by The Sun as saying.

“It’s always been a club that make me emotional,” he added.

“You’ll Never Walk Alone is incredible. No one sings it the way Liverpool fans do.

He continued: “I go on the internet and I listen to it and I make friends watch it. It’s really unique. Really.”