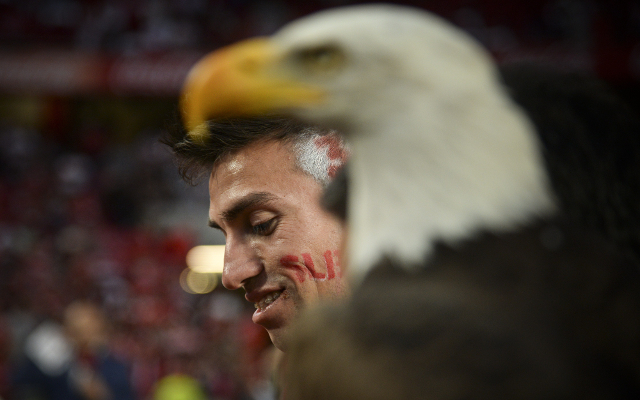 Manchester United are reportedly close to agreeing a deal to sign Benfica winger Nicolas Gaitan according to Portuguese source A Bola.

The publication claim that a deal to bring the 27 year-old Argentine international to Old Trafford from Lisbon is ‘80% to 90% complete’.

Louis van Gaal has already secured the signing of one winger this summer, PSV Eindhoven’s Memphis Depay, and the capture of another wide attacker will surely lead to a number of first team stars in his current Man United squad fearing for their respective futures at the Premier League side.

This term the Dutch boss has leaned towards using Spaniard Juan Mata and rejuvenated England international Ashley Young as first choice wide men and one imagines both will remain key members of the Man United squad in 2015/16.

29 year-old Young made 26 Premier League appearances this season and though some of those were in a full-back role the former Aston Villa man excelled in a more advanced position on the left flank.

Mata, whose career at Man United has been more solid than spectacular, has become a far more effective weapon in the final third under van Gaal. The former Chelsea man has bagged nine Premier League goals in 2014/15, and only Wayne Rooney and Robin van Persie have proven more adept in front of goal this term.

However, it will call into question the futures of record signing Angel di Maria and youngster Adnan Januzaj; after all, there is only need for a finite number of wingers in van Gaal’s Man Utd setup. While it is a squad game these days, not all players would be happy with a rotation role.

Gaitan has played a key role in helping Benfica to back-to-back Primeira Liga titles, but a role at a bigger club could well help the former Boca Juniors star to secure a more prominent role in Gerard Martino’s national team set-up.