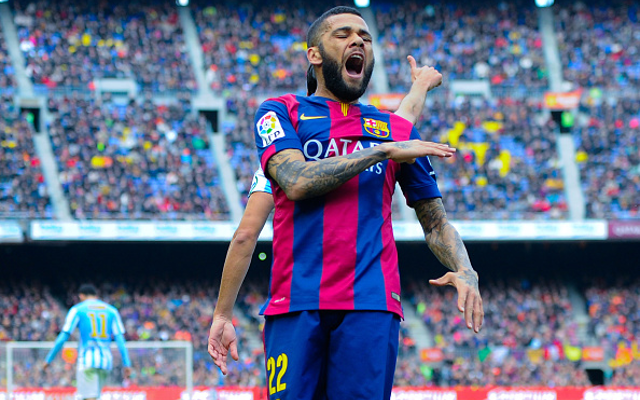 Eric Abidal has urged Barcelona to do everything possible to prolong the contract of Brazil international Dani Alves, with Manchester United and Arsenal both rumoured to be keen on the right-back.

The 32-year-old held a press conference on Monday where he discussed his future at the Camp Nou and argued that he felt that he had been disrespected and treated unfairly by the club [via the Daily Mail].

However, contrary to expectations, the veteran full-back neither confirmed that he would be leaving Catalonia, or giving any clue as to his next destination.

According to the Metro, both Manchester United and Arsenal are believed to be keen on the right-sided defender.

Paris Saint-Germain have been long-term admirers of the experienced wide man [via Foot sur 7], and the French media had expected Alves to confirm that he would be moving to the Parc des Princes next season.

Alves’s evasion has increased speculation as to his immediate future, but also left the door open for Barca to offer him a new contract.

The player’s former teammate, Eric Abidal, has urged his former employers to do all they can to keep Alves at the club.

“Yes, I would give him an extension,” the former France international confirmed, speaking to Mundo Deportivo.

“I am not the president, but I believe that Daniel Alves should continue at Barcelona. The team needs players of his level and I believed that this season he has shown all of his talent.”

As reported by Le 10 Sport, the player himself has confirmed that he will make a decision on his future only at the end of the campaign.

“I have options,” he began, “I am in the process of evaluating them.

“I will talk after the season, without distracting myself. It’s for this reason that I am speaking, I have been disrespected.

“There are limits, there have been too many errors. It’s for this reason that I break my silence, because too much is too much. People are saying that I only think of money.”

The former Sevilla man featured 30 times for Barca in La Liga this season, winning his fifth Spanish title in the process.