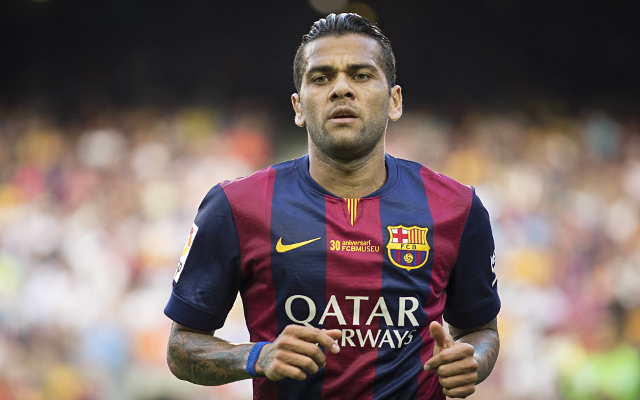 Manchester United have been dealt a significant blow in their pursuit of heavily linked summer target Dani Alves, as Barcelona are to up their attempts at keeping the Brazilian defender at the Camp Nou.

Spanish news outlet Fichajes claim that second-choice right-back, Martin Montoya, will definitely be leaving the La Liga champions in the summer, which has increased the importance of Alves committing his future to the club.

As the Spanish giants are currently serving a transfer ban and Luis Enrique therefore won’t be able to strengthen his side in the summer, Barca are, according to the report, not willing to allow the 32-year-old to leave.

Alves has remained a regular at the Camp Nou, making 40 appearances in all competitions, but will become a free agent next month, and it’s unclear where his future lies. Manchester United have been heavily linked [via the Daily Star], as Louis van Gaal aims to bolster his defence with right-back having been a problematic position for the Red Devils over the past few seasons.

If the Brazil international is to remain with the Champions League finalists, this would be a shock turnaround given only a few days ago he slammed the club for showing a lack of respect in their failure to offer a deserved new contract [via The Guardian].