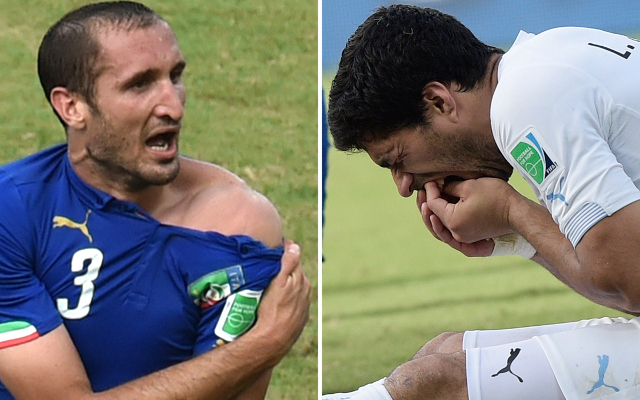 The Uruguayan Footballers’ Union (MUFP) are considering an appeal over the four-month ban Luis Suarez was handed following his bite on Italy defender Giorgio Chiellini at the 2014 World Cup in Brazil.

The punishment delayed the striker’s career at Barcelona, and despite having served his time on the sidelines at the Camp Nou, the nine international fixtures that he will miss mean that will not take part in the Copa America this summer.

MUFP, however, believe that the recent arrests of seven serving FIFA officials over allegations of bribery [via Sky Sports] could open the door for a new appeal over the ban of the Uruguayan forward, despite the court of arbitration upholding their first attempt last August [via The Guardian].

A spokesperson confirmed that, provided Suarez himself agrees, they will make an appeal on the basis that the punishment was decided by a suspected corrupt organisation:

“If Luis Suarez is in agreement, we will ask for the end of the suspension… due to [the player] having been suspended by an organ suspected of corruption,” as quoted by the Mirror.

This latest new related to the crisis at FIFA illustrates the variety of cases that the world governing football body will have to contend with now that their position of authority is under serious threat.