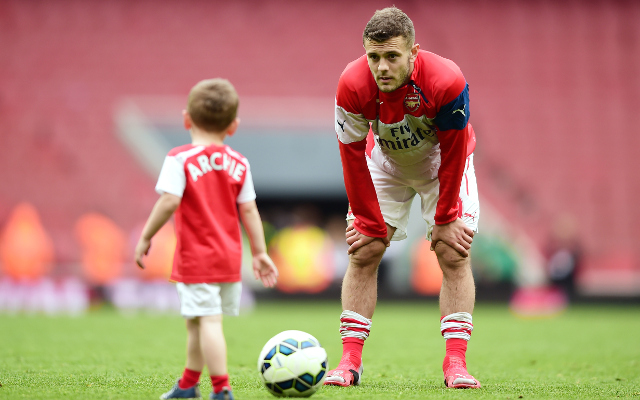 Arsenal fans will be delighted to hear that midfielder Jack Wilshere has insisted that he has no intention of leaving the Emirates following speculation that Liverpool and Manchester City could make a move for the England international in the summer.

The Express claim that Premier League duo Liverpool and Manchester City have been considering a £30m offer in the summer transfer window.

The Reds are on the hunt for a replacement for Steven Gerrard. The Citizens, meanwhile, are not only facing concerns over numbers in midfield following the departure of Frank Lampard and the uncertain futures of James Milner and Yaya Toure, [via Sky Sports] but there’s the matter of the FA’s homegrown quota to contend with.

Wilshere, however, hasn’t been affected by speculation over his North London career and when asked if he believes he will be staying in the summer, replied:

“Of course,” the 23-year-old was quoted by the Express as saying.

“I’ve been injured for a long time this season. I’ve worked hard. All I want to do at the minute is play football.”

While most players will be looking ahead to the summer break, the Gunners’ attention is on reclaiming the FA Cup trophy when they take on Aston Villa in the final at Wembley Stadium on Saturday evening.