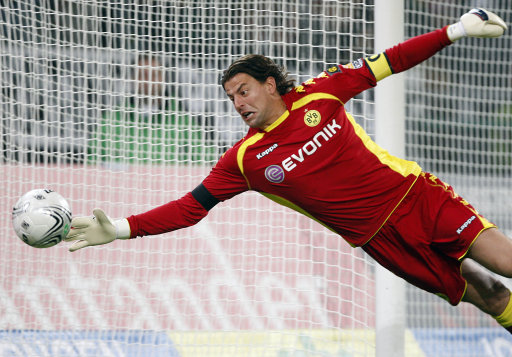 Bayern Munich are once again set to raid rivals Borussia Dortmund for a player, according to reports in the Brazilian version of Goal.com.

This time the player in question is 34 year old goalkeeper Roman Weidenfeller.

He is set to infuriate the Dortmund faithful by following in the footsteps of Götze e Lewandowski, and crossing the divide between the two sides.

He has been at Dortmund since 2002, making 339 first team appearances for the club. Prior to joining Dortmund he played for FC Kaiserslautern.

Despite a fantastic club career that’s seen him win two league titles and grab a Champions League runners up medal, he has not managed to translate that success into the national side.

He has a mere four caps for Germany, making his debut as recently as 2013.

He went to the World Cup in Brazil as the second choice behind Neuer, but didn’t see any time on the pitch