Valencia defender Nicolas Otamendi may already be a Manchester United player as speculation over his future hots up today, following changes made to his Wikipedia page.

The Argentine international, who has enjoyed a superb season at the Mestalla and become regarded as one of the best defensive players in La Liga, is now listed as a £28m signing for United, having taken the number 23 shirt at Old Trafford.

It remains to be seen if this is accurate, with occasional mistakes known to happen on Wikipedia due to relaxed editing rules, though it has often been the case that insiders are quick to the information and update the page accordingly.

Below is an image of Otamendi’s page, so decide for yourselves if this is genuine, or if someone has jumped the gun a little after recent rumours in the press that a deal is edging ever closer. 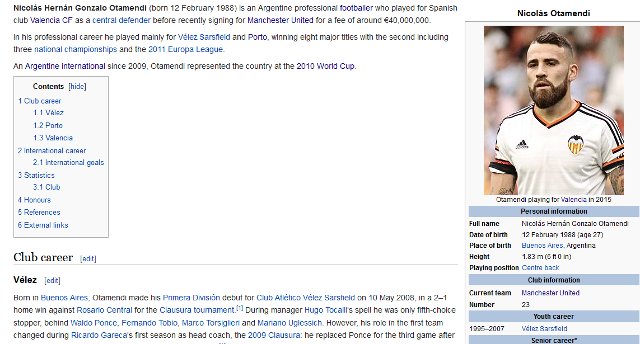