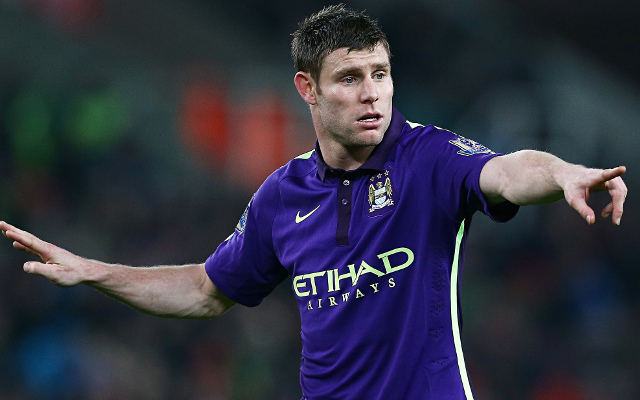 Manchester United emerged as shock latecomers to the transfer chase for out of contract midfielder James Milner, but the Manchester City ace has held talks with Arsenal and Liverpool over a move in the summer.

The Mirror exclusively reported that Manchester United vice-chairman Ed Woodward had contacted Milner’s representatives over a possible move to Old Trafford, as his contract draws to an end with neighbours City.

The newspaper claims that the 29-year-old has rejected a new deal worth £130,000 per-week to remain at the Etihad and he is poised to leave the club next month. However, where his future lies still remains unclear.

According to Sky Sports, the England international has been in touch with Arsenal and Liverpool, yet he won’t be making any decision until after England’s upcoming fixtures.

The Three Lions take on the Republic of Ireland in a friendly on Sunday 7 June and a week later will compete against Slovenia in a European Championship Qualifier.

The former Aston Villa man has struggled for regular playing time during his Citizens career but, ironically, in the final campaign of his current contract he has been a key player for Manuel Pellegrini, making 40 appearances in all competitions.

“I don’t like it, I hope it doesn’t happen” – Liverpool star James Milner fights to save football in superb post-match interview Apr 19 2021, 22:18
Liverpool FC

‘That midfield is a crime against football’ – These Liverpool fans react to lineup as Ozan Kabak debut labelled ‘only positive’ for tie against Leicester Feb 13 2021, 11:44
Liverpool FC