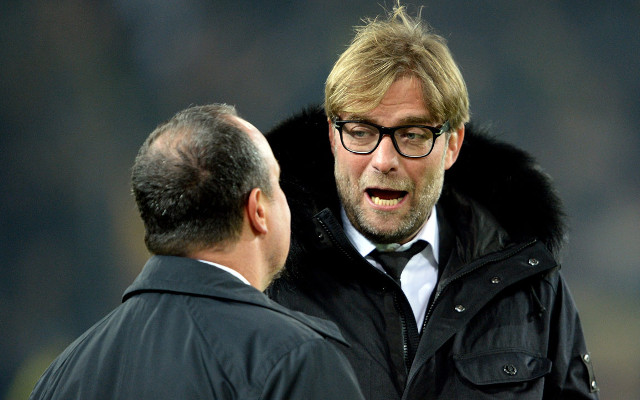 Jurgen Klopp and Rafael Benitez have both been linked with replacing Brendan Rodgers at Liverpool, but the pair have snubbed the Merseyside club with rumoured offers from Napoli and Real Madrid respectively.

A miserable campaign for the Reds has put Brendan Rodgers’s future under question, and Benitez and Klopp were among the names that could take over in the Anfield dug-out [via the London Evening Standard].

However, former West Germany manager Franz Beckenbauer claims that Klopp will be manager of Napoli next season following Benitez’s announcement that he would be leaving the Stadio San Paulo in the summer [via Sky Sports].

He told Sky Sport Deutschland, “Next season Klopp will be training in the South of Italy, at Napoli,” as quoted by the Express.

The 47-year-old bid farewell to Borussia Dortmund after seven years in charge at the Westfalenstadion in the DFB-Pokal final on Saturday. His goodbye to BVB didn’t end in ecstasy as hoped, as Vfl Wolfsburg lifted the trophy following a 3-1 victory at the Olympic Stadium in Berlin.

Meanwhile, Real Madrid vice-president Eduardo Fernandez de Bla seemed to inadvertently confirm that Benitez was heading to the Santiago Bernabeu in the next few weeks as successor to the recently dismissed Carlo Ancelotti.

In quotes from BBC Sport, he said, “Carlo Ancelotti is a phenomenon.

“He was the best coach in the world, just as Jose Mourinho was two years ago and, from this week, Benitez will be.”