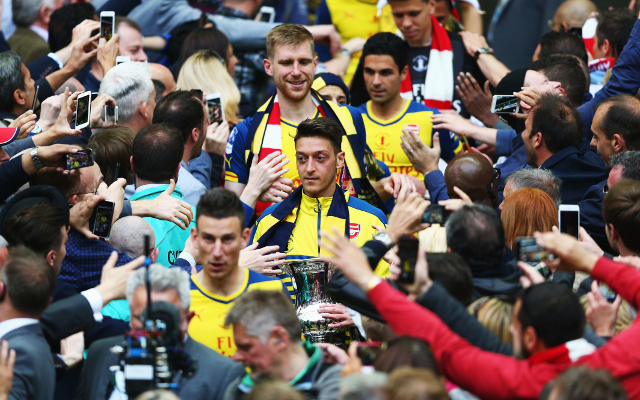 Just days after lifting a second successive FA Cup with Arsenal, playmaker Mesut Ozil has further reason to celebrate after being named as the winner of the 2015 German Football Ambassador Public Award.

The 26-year-old was presented with the award on Tuesday night as has been recognised for his charity work away from the football pitch and donated his prize money towards helping burn victims in Africa (via Mirror Sport).

Upon receiving the award, Ozil would acknowledge the fans that voted for him and responded with a nice video message:

“Thank you for this great award,” he said.

“It means a lot to me especially because it was voted for by the fans. I’m also very proud that I can accept this prize.”

“Many people don’t have the opportunity to enjoy life. Our goal is simply to create a bit of a better future for them. That is our aim,” the Germany international added.

This personal award marks another positive step for Ozil, who returned from a three-month injury lay-off in January to inspire the Gunners to a great run of form towards the end of the season.

His performance last Saturday at Wembley in the 4-0 cup final victory over Aston Villa was one of his very best since his £42.5million transfer from Real Madrid in the summer of 2013.