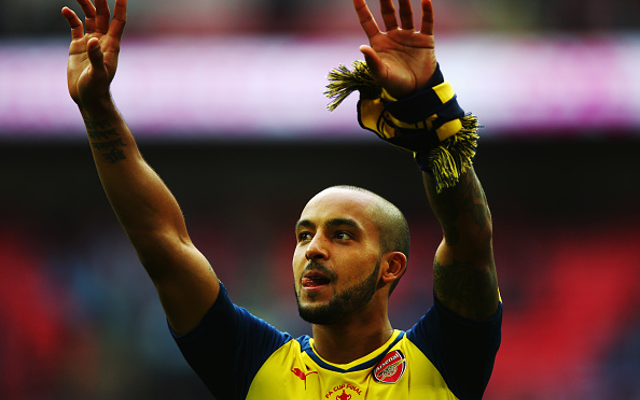 Theo Walcott has taken the time to praise the players that did not take part in Arsenal’s FA Cup final victory over Aston Villa last Saturday.

The likes of Danny Welbeck, Tomas Rosicky and Mathieu Debuchy were forced to watch the game from the sidelines at Wembley despite playing a major part in the run to the final.

Rosicky was brilliant in the fourth round victory over Brighton & Hove Albion as he scored one and created another, while Welbeck scored the winner against his former club Manchester United at Old Trafford at the quarter-final stage.

Debuchy, who has suffered with injuries since joining from Newcastle United last summer, played all 120 minutes as the Gunners squeezed past Reading in the semi-final.

Walcott, who scored the opener in the 4-0 win against Villa, can relate after being ruled out of the 2014 final against Hull City because of injury and has made sure to thank his team-mates for their contributions.

“We need to remember the players that helped us on the run to the final,” he said at the club’s trophy parade (via Standard Sport)

“It wasn’t just about the players who played here. It’s a whole squad, it’s a family thing and it means a lot to everyone,” Walcott added.