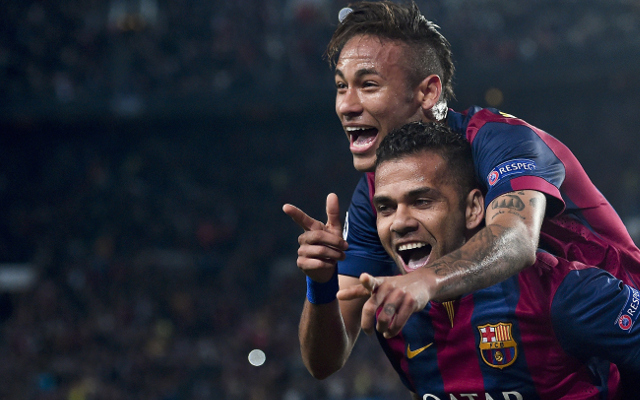 Barcelona forward Neymar is surprised that his compatriot Dani Alves’ future is up in the air ahead of the Champions League final this weekend.

The Brazilian defender has just a few weeks left on his contract at the Camp Nou and is set to announce his future following the game against Juventus on Saturday evening.

Independent Sport claim Manchester United are leading the race to sign the 31-year-old on a free transfer this summer, but Neymar insists he would have not let this situation get this far had he been in charge of the club:

“I hope that Dani Alves stays,” he said (via Goal.Com)

“If I was the president I would have renewed his contract already,” the 23-year-old added.

The pair could line-up alongside each other for one final time at club level as they look to inspire Barcelona to an historic treble against the Serie A champions.

Both combined to devastating effect during the quarter-final tie against PSG back in April as Alves assisted both Neymar’s goals in the 2-0 second leg victory at the Camp Nou.