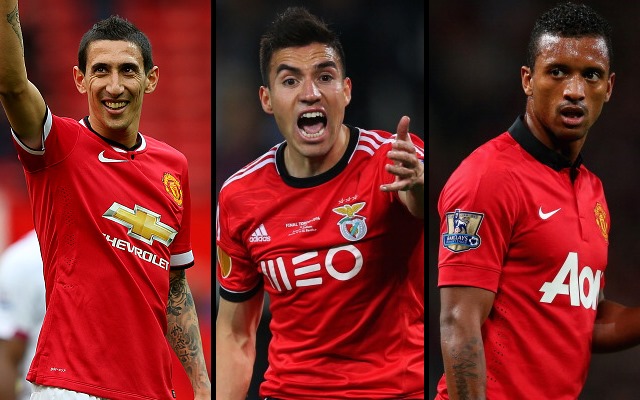 Manchester United have reached an agreement with Benfica winger Nicolas Gaitan, according to Gianluca Di Marzio, although the move may be dependent on Angel Di Maria’s departure from Old Trafford.

The report claims that the Red Devils have agreed terms with the player and are now negotiating with the Portuguese giants to decide on an exact fee for the transfer. They deal as it stands involves unwanted winger Nani moving to Lisbon as well as a cash sum in return for the Argentina international.

Should Louis van Gaal complete the deal, he will secure a player in fine form, coming off the back of a consistent campaign in Portugal. Gaitan scored four goals in 32 appearances this term.

His ability to play on either wing and even centrally will be important to a manager who regularly switches formation, and his willingness to run at players with pace will excite fans. It is easy to imagine Gaitan slipping comfortable into the coach’s preferred 4-3-3 formation.

However, Di Marzio believes that the transfer depends on whether Angel Di Maria leaves Old Trafford, presumably so that there is a space in the squad for Gaitan. However, the 27-year-old himself believes that he will still be at the club next season: “I have just finished my first season playing for Manchester United,” Di Maria began, speaking to the Mirror.

“Now I will play the Copa America and then I will move back to Manchester for next season and do my best there.”

Might a confirmed deal for Gaitan see Di Maria open up to the idea of leaving England after only one season?

There has been interest in the player from Paris Saint-Germain [via TalkSPORT], although Di Marzio doesn’t believe that Gaitan’s move would definitely be dead in the water should Di Maria refuse to budge.

A departure for Nana is plausible, and may well represent a good solution for all parties.

The 28-year-old will say his goodbyes to Sporting Lisbon, where he has been on loan this season, on Thursday according to Portuguese publication O Jogo.

As the midfielder had already been farmed out to Benfica’s fierce rivals it could well be that he decides to stay in the country-where he managed seven goals in 27 appearances in the Portuguese top flight- and the Metro have already considered the prospect that he could be used as a makeweight in a deal for Gaitan.

Nani moved to United in 2007 after learning his trade at Sporting, and won four Premier League titles, as well as the 2008 Champions League, under Sir Alex Ferguson.