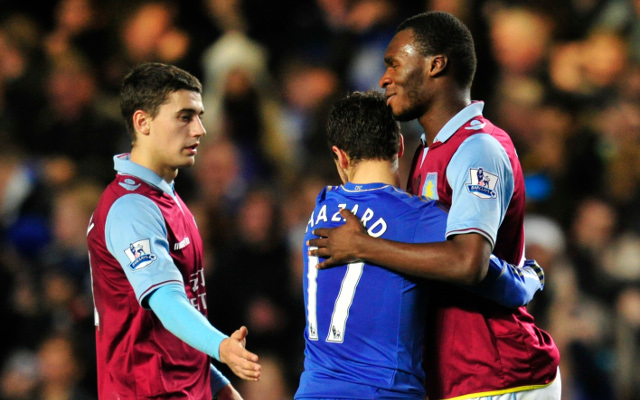 Chelsea star Eden Hazard has revealed that he would love it if the Blues signed Aston Villa striker and fellow Belgian Christian Benteke this summer.

The 24-year-old has been linked with a move to Stamford Bridge amid reports that he has a £32.5 million release clause in his contract with the Midlands outfit. As Didier Drogba has left the London based side it could well be that the forward becomes the second Belgian who attempts to follow in the 37-year-old’s footsteps after now Everton ace Romelu Lukaku.

The latter was unsuccessful in these endeavours after joining the Blues at a very young age, but Benteke may have a better chance. Already established in the Premier League, he scored 16 goals in 37 appearances this season. This includes a great run from when Tim Sherwood became manager of the Villans, where the striker netted 12 times in 15 matches.

Speaking ahead of an incredibly important European Championships qualifier with Wales on Friday, Hazard claimed he would absolutely love it if his international teammate joined.

“If Christian signs with us, I would be the happiest man in the world,” Hazard is quoted in the Daily Mirror. “I have a great relationship with him and would like nothing better than to play with him.

“Christian is 24. He is at an age where he has to make a good career choice. Not that Aston Villa is a small club but he has already played many great games and can now play in the Champions League.”