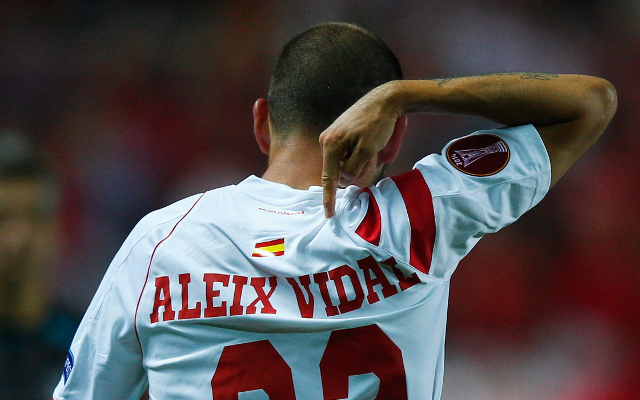 Barcelona appear to be planning for life without Dani Alves following reports in the Spanish publication Sport that they have agreed a deal with Sevilla for Aleix Vidal.

According to Sport, the deal is set to be announced after the Champions League final which takes place on Saturday and the defender is expected to sign for the La Liga champions despite their ongoing transfer ban.

The Spanish source reveal that the versatile star-who recently won the Europa League with Sevilla-has signed a five-year deal at the Camp Nou. It is believed that Barca splashed out €10 million to sign the former Almeria man.

Despite moving to one of the world’s giants, the move represents something of a risk for Vidal, who will not be able to play for his new club until January 2016.

The player is confident, however, that he is making the right move, despite writing-off six months of his career.

Should a deal go through then it may pave the way for Manchester United to complete a deal for Alves, who has been heavily linked with a move to Old Trafford in the last few months [via Daily Star Sport].

The Brazilian is out of contract at the end of this month and recently confirmed his frustrating with the Barca board, and saying he will announce his decision following the Champions League final [via the Daily Mail].  It may be that the Catalan giants have made Alves’s decision for him.

Vidal has enjoyed a brilliant season with Sevilla as he has helped clinch back-to-back Europa League titles and a return to Champions League football next season.

In addition, the Catalan has been called into the Spanish national team for the first time in his career and could make his debut in the friendly against Costa Rica on June 11.