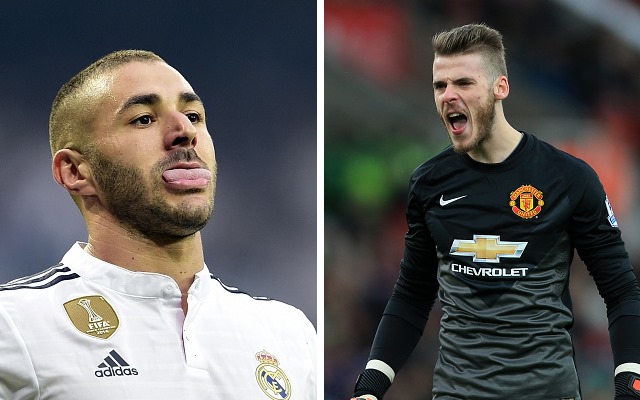 AS have reported that Real Madrid are hoping that selling Karim Benzema to Manchester United will encourage the Red Devils to soften their resolve concerning David De Gea.

The France international has previously been linked with a move to Old Trafford, and transfer speculation has intensified over the last week following reports that the player’s agent had met with a representative from United.

According to the Manchester Evening News, player representative Karim Djaziri met with the Red Devils’ executive vice-chairman Ed Woodward at the Savoy hotel in London.

It is believed that the parties met to discuss a potential £40 million move for the former Olympique Lyonnais hitman.

AS have noted that Real are open to the sale of Benzema—a player who may be reduced to the peripheries should new coach Rafael Benitez act out his intention of playing Cristiano Ronaldo as the Merengues’ centre-forward [AS via the Daily Mail].

With Radamel Falcao having left the Old Trafford following the end of his loan deal [ManUtd.com], and with the futures of Javier Hernandez [via Eurosport] and Robin van Persie [Mirror] up in the air, United will surely be keen for offensive reinforcements this summer.

Memphis Depay has arrived from PSV Eindhoven, but it is unlikely that Louis van Gaal would be able to pass up the chance of signing a world-class operator such as Benzema.

While United appear interested in Benzema, Real have made little secret of their desire to bring De Gea to the Bernabeu [AS via the Daily Mail].

The Spain international is considered to be the natural successor to veteran stopper Iker Casillas, and being only 24, could offer a decade of service to the Spanish giants.