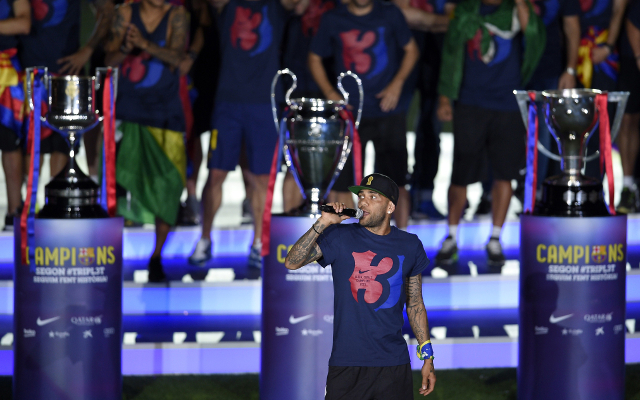 Agreement to extend Dani Alves’ contract for two further seasons with the option of a third http://t.co/ohPhi1DdtQ pic.twitter.com/SHSVYBcVii

The Brazilian defender’s previous deal with the Catalan giants was set to expire at the end of the month and has been strongly linked with a move to Manchester United on a free transfer this summer [via Manchester Evening News].

Events over the weekend seemed to have signaled Alves’ departure from the Camp Nou after team-mate and close friend Neymar posted an emotional message via his official Instagram account which appeared to say goodbye.

The caption reads: “The person here is the one responsible for making my dreams come true.

“My friend, companion, wingman, brother. Thank you for ‘looking after’ me for those two years here, Dani. I love you, bro.”

Then the signing of Aleix Vidal from Sevilla on Monday was viewed by many as a direct replacement for Alves, however, the 32-year-old has now put pen-to-paper on a new deal with an option of a third year which could see him finish his career with Barca.

Alves, who signed for the club in 2008, was part of the latest Barcelona dream team that clinched a second treble in six years, but surprisingly failed to find the back of net in his 41 appearances in all competitions this season.