West Ham United chairman David Gold has announced that the club are signing Pedro Obiang from Sampdoria with a picture of Juventus centre-back Angelo Ogbonna. 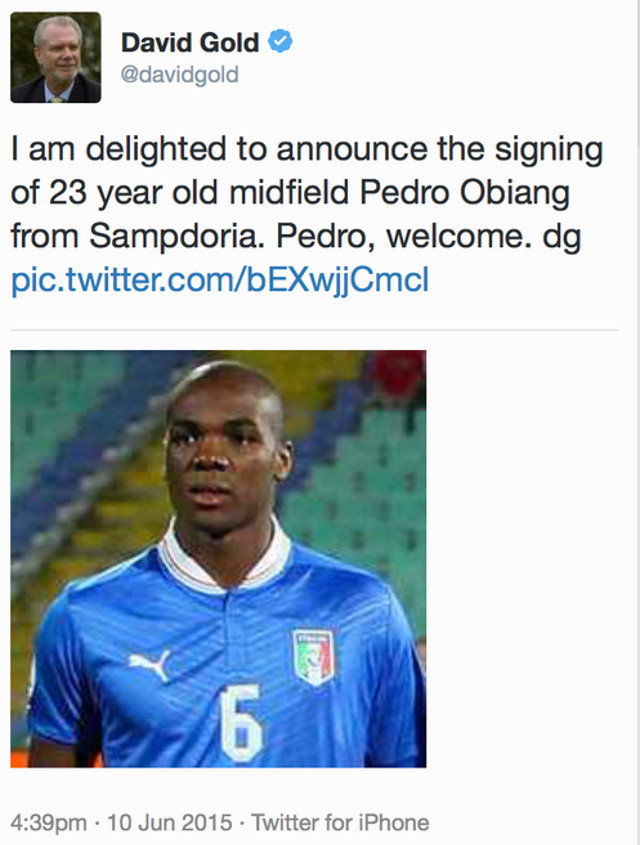 After realising that he had made the error, Gold quickly tweeted again, this time with the correct picture and an accompanying post about how excited the Spain Under 21 star is to be at Upton Park. Clearly the midfielder looks nothing like Ogbonna, being significantly smaller and also having a full head of hair!

I am delighted to announce the signing of 23 year old midfield Pedro Obiang from Sampdoria. Pedro, welcome. pic.twitter.com/IBX6EOUx5p

I’ve just spoke to Pedro and he sounded v excited to be here. He promised me that he’d learn to sing Bubbles in less than a month! dg

The 23-year-old has joined after playing 132 times in five years for Sampdoria, and is the East London outfit’s first signing since they announced manager Sam Allardyce was leaving the club.

The midfielder has moved to West Ham on a four-year deal having helped Samp to seventh-place in the Serie A table.

New boss Slaven Bilic appears to have either moved quickly or agreed with the club’s prior plans to sign Obiang. The Croatian needs to get his squad together soon as their first game in the Europa League is on July 2.

“I’m very happy to have signed,” said Obiang, as reported by The Guardian.

“We have been talking about this for a long time and now I’ve finally got the chance to come here. I went on holiday after the season had finished and I was looking forward to receiving that call to tell me where and when to sign for this club.

“I’m very excited to play in the Premier League. It’s a style of football that will help me to progress as a player and as a person.

“I think Bilic is a manager that can do very well here. I know that he was a West Ham player and he did very well with the Croatian national team. He is a manager that likes to play good football and I really like that so I am sure that we will get along very well.”