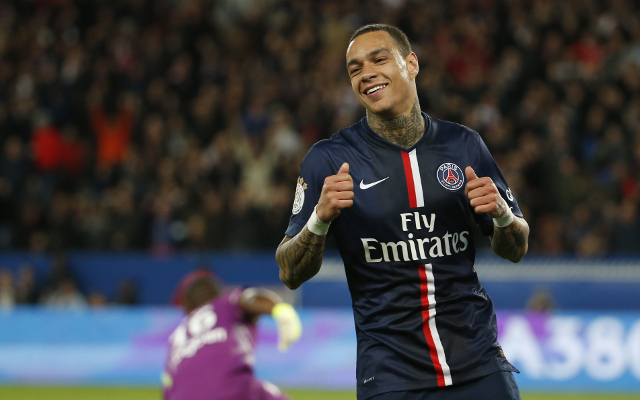 Paris Saint-Germain are looking to offload right-back Gregory van der Wiel in the summer transfer window, and have utilised Dani Alves’ Barcelona u-turn by offering the defender to Manchester United.

According to the Daily Mail, the Red Devils are likely to be interested in the Netherlands international after missing out on signing Barcelona full back Dani Alves on a free transfer. The Brazil international signed a new two-year deal with the Spanish giants, three days after their Champions League final triumph [BBC Sport].

The Mail state that Van der Wiel has just one year remaining on his current contract at the Parc des Princes, and the quadruple history-makers want to sell now to avoid the 27-year-old leaving on a free transfer at the end of next season. PSG reportedly value the former Ajax star at £7m.

Right-back has been a noticeable position of concern for the Red Devils over the past few seasons, with Rafael proving unreliable both in his performances and fitness. There have even been suggestions that the Premier League giants are still searching for a replacement to Old Trafford legend Gary Neville [Manchester Evening News].

Phil Jones and Chris Smalling have both featured in the position in their early Manchester United careers; however, Louis van Gaal is eager to develop the pair’s experience and partnership in central defence, and they were both deployed only in the central defensive role in the Dutchman’s debut Old Trafford campaign.

Rafael da Silva’s future at the Theatre of Dreams is also uncertain having not featured since the FA Cup third round versus Yeovil Town in January and, according to the Daily Star, is expected to be sold.

Versatile midfielder Antonio Valencia has been a regular at right-back, making 18 appearances in the position. While his 2014-15 season stats are impressive –  averaging 2.9 tackles per game, 1.9 interceptions and boasting an 89.5% pass success percentage – the 29-year-old is not a long-term solution. His attacking threat on the wing is also consequently limited in the position, and Louis van Gaal may prefer to play the Ecuadorian further forward if a right-back can be bought in the summer.

The Red Devils have reportedly revived their interest in Southampton’s Nathaniel Clyne [ESPN] and, with Premier League experience and three years younger than Gregory van der Wiel, could be a much better investment for Louis van Gaal than the PSG defender.