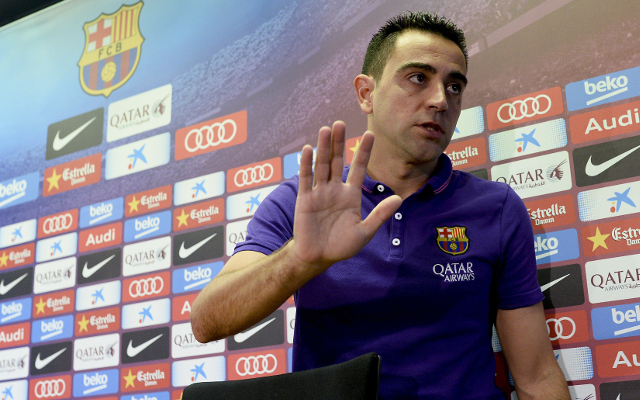 Out-going Barcelona skipper Xavi has lifted the lid on a recent minor spat with team-mate Neymar.

The pair clashed during the club’s open-top bus trophy parade last week and the former Spain international was captured on camera shoving the Brazilian wonderkid.

Speaking at his Al-Sadd unveiling on Thursday, Xavi told the media [via Mail Sport] that he reacted angrily to a unnecessary prank and had some words of advice for Neymar in the future:

“He (Neymar) was trying to take my shoes off and pushing me when I was on the edge of the bus,” the legendary midfielder revealed.

“I said that they should stop messing about and concentrate on the people that had come out to wave as the bus passed.”

“These parades are for the people after all. It’s okay to have three or four beers but the parade is for the people and it’s the chance for us to thank them for our support. You can’t just do what you want to do,” he added.

Xavi’s 17-year accossoation with Barca has come to an emotional end but he was able to bow out of European football at the very top as he captained the side to an historic treble this season.

He came on for the last 12 minutes of the Champions League final against Juventus last weekend – the game in which Neymar scored the decisive third goal –  to claim his his fourth winners medal in his career.

The 35-year-old will continue his footballing career in Qatar after penning a three-year deal with the Middle Eastern outfit.