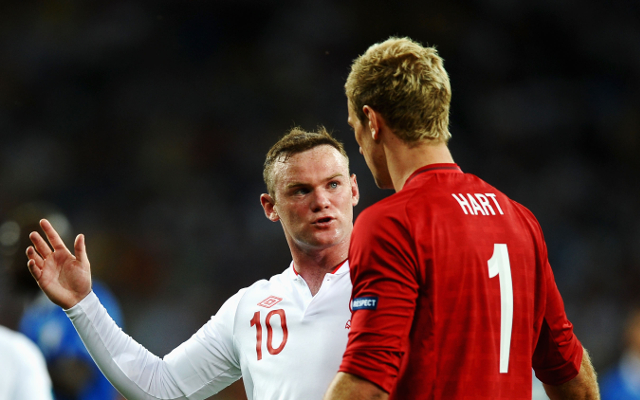 The Three Lions skipper needs three more goals to move ahead of Sir Bobby Charlton and set a record of a half century of goals for the national team.

England face Slovenia in a Euro 2016 qualifier at the weekend and Rooney could pull level with Gary Lineker on 48, while he would need a brace to equal Charlton’s goal-haul of 49.

Against the Republic of Ireland in the international friendly last week, the 29-year-old struggled throughout and spurned his one and only decent opening in the second half as his heavy touch from a Jordan Henderson pass denied him a effort on goal.

Recent history suggests Rooney will get on the scoresheet against Slovenia as he has found the net in each of the last four qualifiers and team-mate Hart is hoping to be apart of history:

“I’m looking forward to hopefully being in the team when Wayne makes history,” the City stopper told the media [via Mirror Sport].

“But right now he’s all about the team. I’m sure he’d take not scoring for the next five games if we won the games.”

“But if we win, generally he scores,” Hart added.

England legend pinpoints the priority areas that the Three Lions need to be focused on Jun 14 2021, 12:42
England National Team