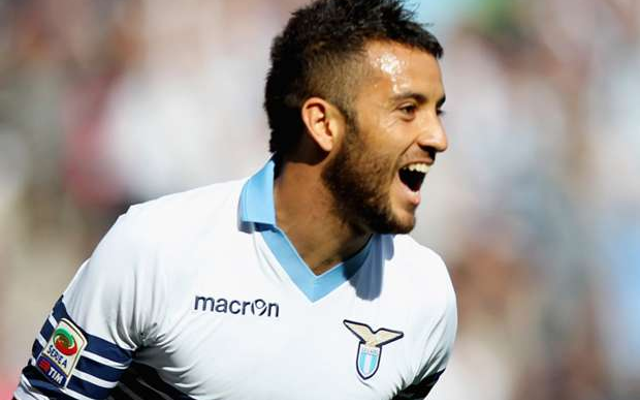 Lazio forward Felipe Anderson has spoken publicly about his intentions for next season, with Manchester United and Chelsea both linked to his signature.

The Brazilian attacker has enjoyed a fine campaign in Serie A and was influential as the Rome giants secured an unexpected return to the Champions League.

He bagged 10 goals in the top flight and also contributed seven assists as Lazio secured a 3rd-place finish.

His impressive form has attracted interest from the Premier League, but Anderson insists he is not looking to leave the Stadio Olimpico.

“Next year? All I know is I’ll be playing for Lazio,” the 22-year-old said, speaking to journalists in his native Brazil, via Football Italia.

“I only recently renewed my contract for another five years. I’m thinking about that shirt, and nothing else.

“I don’t know of any offers, my future is at Lazio.”

Last week, the Daily Star reported that United were planning to test Lazio’s resolve with a £30 million bid for the talented attacking midfielder.

The tabloid also noted that Louis van Gaal was a big fan of the player, and would love to add him to the squad’s offensive options ahead of the 2015-16 season.

It had been mooted by the Daily Star that should Lazio make concrete their reported interest in Red Devils striker Robin van Persie, United could capitalise and attempt to procure Anderson as part of a player-swap deal.

Manchester City and Barcelona have also been named as potential suitors for the player, who learned his trade with Santos in his homeland before moving to Serie A in 2013.

If Anderson has indeed closed the door on a move, then United may well look to move for one of their other rumoured offensive summer targets.

Karim Benzema has been heavily linked with a move to Old Trafford [Metro], particularly after his agent was seen meeting with United executive vice-chairman Ed Woodward in a London hotel. It may be that the French forward is used as a makeweight in any deal taking David De Gea to Real Madrid.

Sevilla hotshot Carlos Bacca has also been linked to the club [Metro], while Harry Kane has been rumoured the subject of an audacious planned-£50 million bid on the part of the Red Devils [Daily Mail].