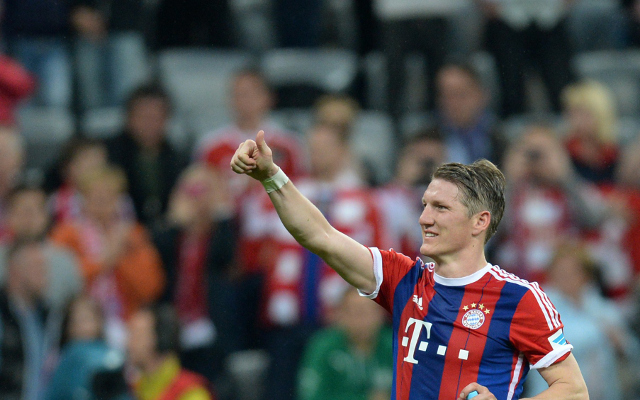 Bayern Munich midfielder Bastian Schweinsteiger met with Manchester United officials last month and the possibility of moving to Old Trafford in the summer transfer window was the topic of conversation.

In an interview with German newspaper SportBild, Bayern CEO Karl-Heinz Rummenigge didn’t rule out the sale of the Germany legend, but revealed that he would only be granted an exit if the player himself asks for a transfer.

The Daily Star claim that the Germany international held informal talks with Red Devils chiefs in May when the midfielder made a trip to England. According to the newspaper, Schweinsteiger is at the top of Louis van Gaal’s midfield wish list – ahead of rumoured targets Ilkay Gundogan and Morgan Schneiderlin.

The British tabloid go on to report that Pep Guardiola values the 30-year-old at £10m – a price tag that the Premier League giants would comfortably match, particularly for a player of esteemed experience.

The Red Devils have struggled to replace Paul Scholes in the centre of the park, and are still in search of a successor, despite his retirement at the end of the 2012-13 season.

Michael Carrick is the preferred holding midfielder at the Theatre of Dreams; however, injury concerns, and the fact that he is in the twilight of his career at 33, mean that the England international is not a long-term solution for Louis van Gaal – regardless of whether he can maintain his fitness.

Both Carrick and Schweinsteiger have been limited to cameo appearances this term largely due to injury, with the German missing the opening three months of the season. He was a mainstay in the side upon his recovery though, and remains a top class midfielder.

Looking at these stats, few Manchester United supporters would fail to welcome the Bayern Munich icon to Old Trafford. Despite his 31st birthday to come in August, his wealth of experience combined with his balance of offensive and defensive play could make him the perfect fit for Louis van Gaal’s side. His possible arrival could also allow striker Wayne Rooney to regularly play further forward with the England international having played a variety of positions, including centre forward and central midfield, throughout the 2014-15 campaign to make up for the lack of options in midfield.