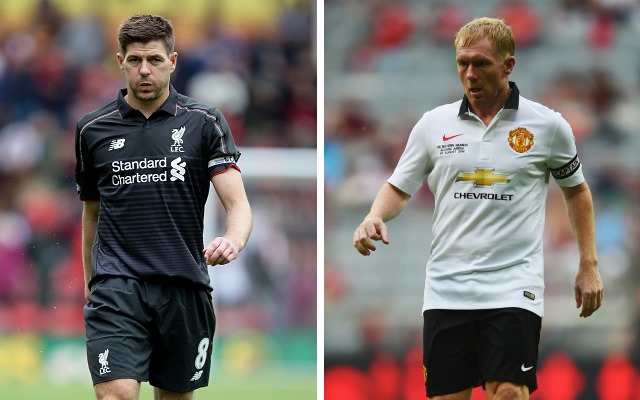 England’s Golden Generation produced at least three world-class central midfielders, with Scholes, Gerrard and Frank Lampard all vying for places in the heart of the Three Lions team.

The debate over which of the trio is the best is ongoing, and divides opinion, with Sky Sports pundits Jamie Carragher and Gary Neville sharing one memorable discussion on the subject on Monday Night Football [via The Guardian].

Zinedine Zidane is another great who named Scholes and Gerrard as two of the best midfielders of the last 20 years [via Manchester Evening News].

Former South Africa international Fortune has become the latest high-profile ex-player to contribute to the debate, and unsurprisingly, he comes down firmly on the side of his old teammate Scholes when comparing him to Liverpool man Gerrard.

“They shouldn’t even be having this conversation. It’s like comparing Mayweather to Ali – in my opinion, it’s just no comparison. It has to be Scholes,” he began, speaking to Manchester United’s official website.

Fortune arrived at Old Trafford in 1999, representing one of Sir Alex Ferguson’s rare forays into the African market.

He remained at the club for seven years as a teammate of Scholes, and although rarely a first-team regular, provided sterling service with Ferguson using his versatility to great effect.

Before leaving for Bolton Wanderers in 2006, he made 76 league appearances for the Red Devils, winning the Charity Shield in 2003 and the now-defunct Intercontinental Cup in 1999.

Scholes enjoyed great success at United, the only club he ever played for, and became one of the most decorated players in the history of the game.

Gerrard, by comparison, never won the championship—a regret that he admitted when he finally called time on his Anfield career earlier this year [via Daily Mail].

It is perhaps worth noting that while Scholes only picked up 66 England caps, Gerrard managed almost twice that, making 114 appearances for the national team between 2000 and 2014.