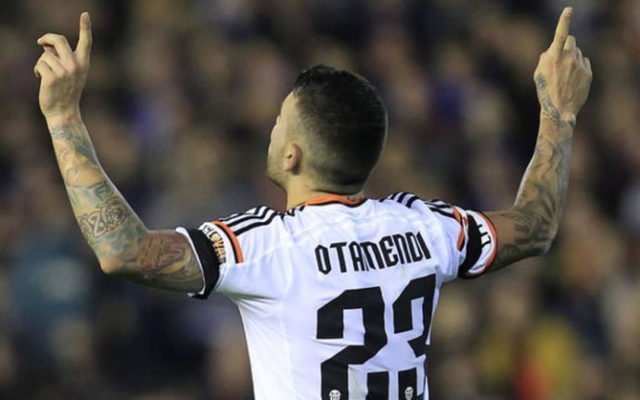 Valencia star Nicolas Otamendi is desperate to move to Manchester United so he can join good friend Marcos Rojo, reports the Daily Star.

The Red Devils are expected to be making a £25 million bid for the 27-year-old, but the Liga BBVA outfit are keen to get around £35 million for one of their prize assets. Whichever side wins the negotiation for the centre-back, the Spanish side will expect to make a massive profit on the €12 million that ESPN reported they paid for the defender last summer.

Louis van Gaal is showing an interest in the Argentina international after a season in which he has heavily rotated his options in the middle of his back line. Chris Smalling seems to have come out the experimentation as a regular starter, but there are still question marks over Phil Jones and Jonny Evans.

This could be why the 63-year-old is searching for top-class reinforcements in the position, with United already having an audacious £110 million-bid for Gareth Bale and Real Madrid centre-back Rafael Varane rejected by the Spanish giants already this summer [Telegraph].

Having goalkeeper David De Gea being linked very heavily to Real Madrid by the Independent also adds an air of urgency to the situation, with van Gaal unlikely to be able to count on the security and the composure contributed by the 24-year-old stopper.

With much of the summer potentially taken up with a search for a new goalkeeper-Petr Cech [Manchester Evening News] and Hugo Lloris [Goal] have been linked to the club-van Gaal may well want to get his defensive line sorted out as soon as possible.

Otamendi could certainly improve the Red Devils’ defence, having been a key part of bringing Champions League football to the Mestalla last season.

Valencia finished fourth in La Liga after conceding just 32 goals in the 38 matches. The Argentine played 35 of those games and could bring the same solidness to the United defence.

Video: Nicolas Otamendi has a shocker on his Benfica debut with costly error leading to a goal Oct 7 2020, 7:08
Manchester City