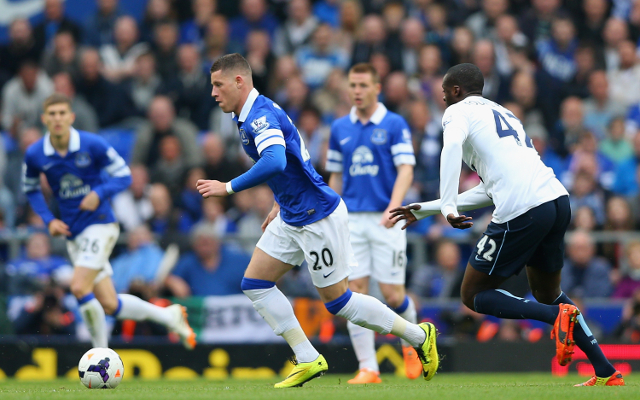 Promising England midfielder Ross Barkley has revealed he is paying close attention to a pair of world-class players in order to improve his game, Mail Sport reports.

The Everton youngster burst onto the scene in the Barclays Premier League during the 2013-14 season where his impressive performances earned him a deserved call-up to the Three Lions squad for last summer’s FIFA World Cup.

However, the past season has been somewhat of a struggle for the 21-year-old as he hasn’t hit the heights of his breakthrough year and scored just twice in 29 league appearances. Barkley admits he needs to improve and has revealed that he’s been watching Arsenal playmaker Mesut Ozil and Manchester City’s powerhouse for tips on how to reach the next level:

“At club level I don’t think I did as well as I wanted to do this season, but still I have learnt a lot and felt like I’ve improved as well,” he said.

“I’ve also been watching clips on Yaya Toure and Mesut Ozil. Ozil is so calm in possession and picks the right passes, which is something I’ve got to get a bit better at.”

“I just observe, just watch clips on YouTube and the spaces he moves into.”

“With Yaya Toure (it is) the breaks forward he does and the counter-attacks. When he gets the ball his distribution is really good too,” Barkley added.

If recent reports are to be believed then Barkley could be lining up alongside Toure in the near future amid speculation that City are preparing a huge offer this summer [via Metro Sport].

Despite his below-par campaign for the Toffees, Barkley is currently away with the national team in preparation for the Euro 2016 qualifier against Slovenia this Sunday.