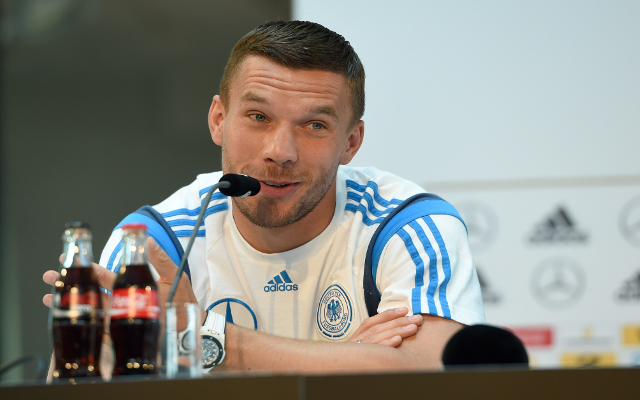 Arsenal have agreed the sale of German international Lukas Podolski to Galatasaray, according to Turkish source Aksam (via talkSPORT).

The 30-year-old World Cup winner spent half of last term on loan at Serie A side Inter Milan, and while he completely failed to shine in Italy, netting just one goal for the San Siro side, his form hasn’t seemingly scuppered his imminent transfer to the Turkish giants.

Arsene Wenger paid £10.9m to sign Podolski just under three years ago (via Daily Mail) and it would be fair to deem his time at the north London club a failure.

Podolski arrived at Arsenal to a fanfare and while he has proven a fan favourite, his return of 31 goals in 82 appearances will be below what Wenger would surely have hoped for.

The arrivals of Alexis Sanchez and Danny Welbeck last summer may well have proven the death knell for Podolski’s future at Arsenal. His chances of first-team football for the Gunners in 2015/16 would have been slim, so this deal seems to make perfect sense for both parties.

Aksam state that the fee for the attacker would be just £1.4m, a very low price to pay for such a decorated national team star, though with just one year left on his Arsenal contract it’s clear his valuation will have been significantly decreased.

It’ll be interesting ti see whether Arsenal look for a direct replacement capable of either playing wide left or central.