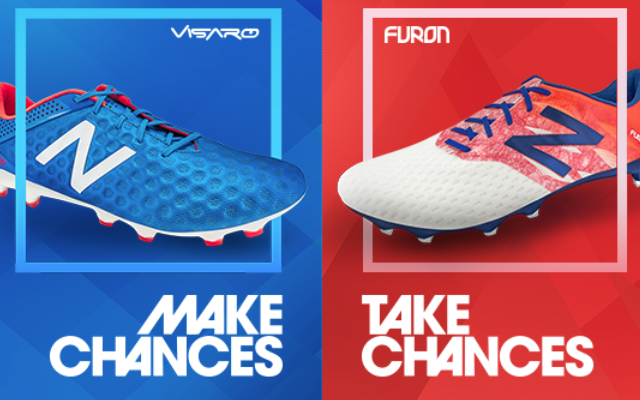 New Balance Football, who are making Liverpool’s kits from the 2015/16 season onwards, have released two new boots to the market – the Visaro and the Furon.

Both are made specifically for players who like taking risks and using their creative spark on the pitch. The Visaro and Furon celebrate those who play football the way it should be payed.

Players in Visaro boots ‘Make Chances’, and those in the Furon ‘Take Chances’. That’s the New Balance Football philosophy.

You can order both New Balance Football boots, right here.

Playmakers, wingers and those charged with supplying chances and feeding team-mates need the Visaro – so New Balance Football have included a ‘Vari-zone Ariapene upper for incredible ball manipulation, a Super-Flex soleplate for exceptional ground contact and a low pressure instep’.

Deadly strikers and attackers who thrive off bursts of acceleration are encouraged to don the Furon. It has a ‘stiffened soleplate for exceptional energy return and unparalleled acceleration. Also built into the boot is ultra-directional styf design for unrivalled straight-line speed.’

“What has been clear right from the start is that New Balance set out to design a boot to help attacking players – I have worked closely with them from the original prototype to ensure they achieve this. This boot feels like it’s been made especially for me and I know others will feel the same way,” he said.

Global Head of New Balance Football Richard Wright explained why the new boots will be so beneficial for modern footballers.

“Over 90 minutes, players cover more ground than ever before and the distances run in football far exceed that of any other sport. We have a very strong heritage in running and applying this expert knowledge to the endurance and high intensity of football.”

Check out the full video here

“We recognise that the modern game is powered by attacking football. Therefore, we have developed two styles of boots for attack-minded players. The players that ‘Make Chances’ and the players that ‘Take Chances’. We believe these boots will meet the player’s performance demands and amplify their unique set of skills – not only just at the top level of the game but at every level of football.”