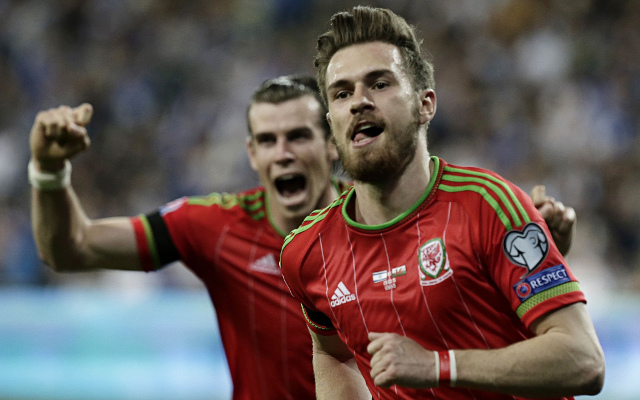 Arsenal midfielder Aaron Ramsey caused a social media stir after posting a Tweet in the Welsh language, and some social media users even when so far as to abuse the Wales international for not writing in English while others accused him of being drunk.

To celebrate his wedding anniversary, the 24-year-old tweeted a picture of himself and his wife Colleen with the words ‘Un flwyddyn heddiw’ – which is Welsh for ‘One year today’.

Ramsey’s 1.88m followers, however, struggled to view the post as a showing of affection to his partner and his home country – instead opting to hurl abuse at the midfielder.

And here are some of the controversial responses, including ‘Did you have a seizure?’:

@aaronramsey ENGLISH, MOTHERFUCKER! DO YOU SPEAK IT?

@aaronramsey Did you have a seizure while typing this tweet or something? — BG (@BanterousGooner) June 8, 2015

The Gunners ace was recently in action for his country, as Wales beat Belgium 1-0 – who are rated as the second best team after Germany in international football – and have edged closer to Euro 2016 qualification. Real Madrid winger Gareth Bale netted the winner at Cardiff City Stadium on his 50th appearance.