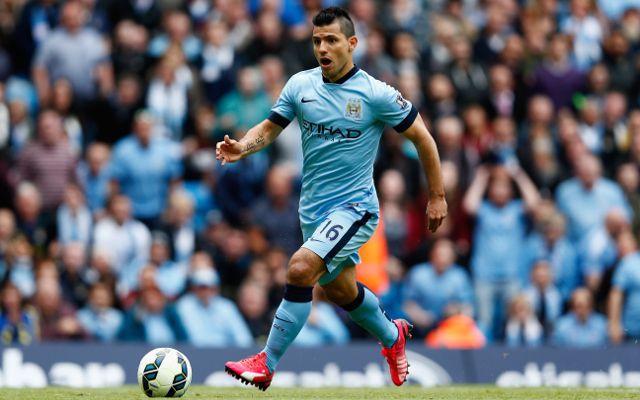 Sources in Spain suggest Sergio Aguero may be playing ‘transfer tactics’ by declaring his recent love for Manchester City, as Real Madrid remain keen on the Argentina striker.

In quotes from the Daily Mail, the Argentina international stated his desire to remain in the Premier League – in a top flight where he believes he has the best chance to compete with Lionel Messi and Cristiano Ronaldo for the Ballon d’Or.

His comments, nonetheless, don’t appear to have put off Los Blancos, as new manager Rafael Benitez remains intent on landing the 27-year-old forward in this summer’s transfer window, report Spanish newspaper AS.

According to the source, the former Liverpool boss needs to return optimism to the Real dressing room following Carlo Ancelotti’s trophy-less last season.

Aguero, AS state, could be an ideal top-class player to excite and enthral the Santiago Bernabeu. They also suggest that that the Argentine striker could be being tactical in declaring his love for Man City, and may be seeking a move to Madrid.

The uncertain future of Karim Benzema – who is said to be on Arsenal’s radar [via Fox Sports] – combined with the Liga BBVA giants opting not to sign Manchester United’s Javier Hernandez on a permanent basis, following the expiration of his loan deal, looks to have put a new forward at the top of the club’s transfer wish list.

The Citizens, therefore, could face a challenge in keeping their top goalscorer at the Etihad. Not only are the Merengues interest in his signature, but City’s neighbours Manchester United have also been linked with a sensational move – though such speculation has been quashed by the player himself [via the Daily Star].

However, landing Aguero may not be smooth sailing financially.

AS claim that the Etihad attacker would cost at least €60 million, and the club would thus have to put a number of star players up for sale to avoid damaging their financial status. They currently have a gross debt of €602 million and are considering selling Fabio Coentrao and Benzema to fund the arrival of potential galacticos in the coming weeks and months.

Sport Mediaset [via AS] have reported that Rafael Benitez is also considering a move for Inter Milan striker Mauro Icardi.

While a formidable threat in front of goal, the problem with the former Atletico Madrid striker remains whether he can avoid injury and maintain his fitness across an entire campaign. He was absent for eight games with knee ligament damage [via the Mirror] – missing 34 crucial days over the festive period from December 7th to January 10th – and manager Pellegrini will hope there will no repeat next season, as they look to challenge champions Chelsea for the title.