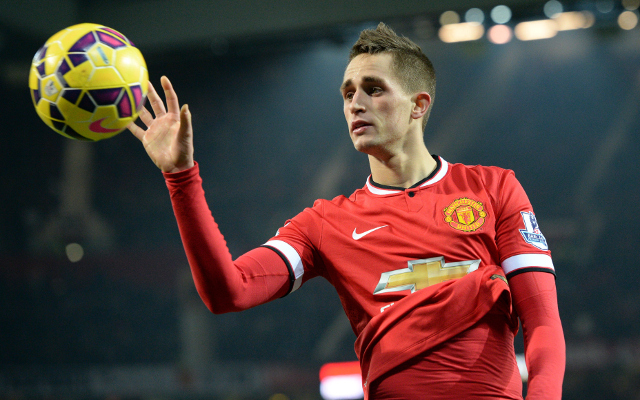 Manchester United forward Adnan Januzaj has denied suggestions that he is set to leave the club this summer, and has insisted he wants to go on to make a big impression at Old Trafford.

The 20-year-old has been linked with several major clubs ahead of a potential summer move, following a limited influence under Louis van Gaal last summer.

However, his representative Dirk de Vriese has denied suggestions that the Belgian is heading for a move away from Manchester.

“This is total nonsense,” the agent began, speaking to Sport Witness [via the Daily Mail].

“Adnan is feeling good at Manchester United and they don’t want him to leave the club.”

De Vriese went on to explain the player’s desire to enjoy a long career at Old Trafford.

“He is considered still as their biggest talent since many years,” he continued, “There was a lot of top teams asking to buy him and a lot of sub-top teams to loan him but he will stay at Manchester United to become a legend in the club.”

According to the Mail, Premier League duo Everton and Sunderland have both expressed an interest in signing the forward. David Moyes, the manager who oversaw Januzaj’s emergence at the club during the 2013-14 season is also believed to be keen on taking him to Real Sociedad.

Current Red Devils boss van Gaal has already dipped into the transfer market this summer, bringing Memphis Depay to Old Trafford. The former PSV Eindhoven attacker, who featured under the Dutch coach during his time as Netherlands manager, represents further competition for Januzaj.

The versatile forward option made 18 Premier League outings last term, although only seven of them were from the start.

He didn’t contribute a single goal or assist in the top flight, or indeed, in any competition for the 20-time English champions.

This represents a considerable drop-off from the previous campaign, when the forward managed 27 EPL outings—including 15 starts—scoring four goals and contributing three assists.

To date, Januzaj has featured five times for Belgium, although he had also been eligible for Albania, Turkey and Kosovo.

A litany of offensive talents have been linked to Old Trafford this summer, and should the likes of Antoine Griezmann [Metro], Robert Firmino [Metro], Gonzalo Higuain [Daily Star] and Nicolas Gaitan [O Jogo via the Metro] join the club, Januzaj ought to consider the prospect of a future elsewhere.