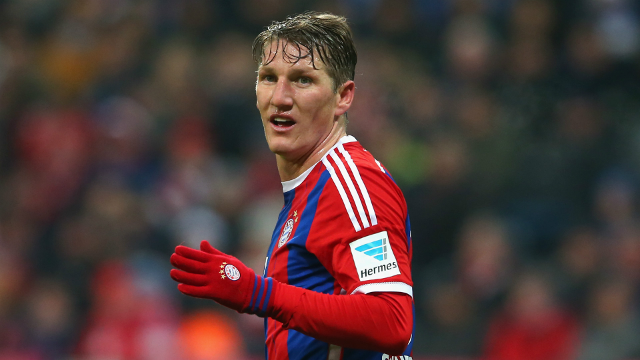 Bayern Munich and Germany icon Franz Beckenbauer has urged Bastian Schweinsteiger to snub a move to Manchester United and remain at the Allianz Arena.

The World Cup winner has been heavily linked with a move to Old Trafford this summer, with the Independent reporting that Louis van Gaal has made the midfielder one of his key summer transfer targets.

However, Beckenbauer—who won the World Cup with Germany exactly 40 years before Schweinsteiger did—has urged his compatriot not to think about moving away from the Bundesliga.

“Adapting to a different European league is difficult at his age,” the legend began, speaking to Bild [via the Express] when asked about the possibility of a move for the Bayern hero.

“He has played with great force and put a lot of pressure on his body for many years. That saps energy. He could end his career in the USA instead.

“If I was at Schweini’s place,” Beckenbauer concluded, “I would stay one or two years more at Bayern. Until then, he can still perform at the highest level.”

The 30-year-old has won all there is to win at Bayern, and may be tempted by a new challenge at Old Trafford. Since beginning his youth career in Bavaria in 1998, he won eight Bundesliga titles at the club, seven German Cups, and also lifted the Champions League in 2013 as a key man in Jupp Heynckes’s side.

He was also influential as Joachim Low’s Germany side lifted the World Cup in Brazil last summer, and has twice been a defeated semi-finalist at the global showpiece.

Originally a more offensive player, Schweinsteiger was developed into a world-class deep-lying midfield operator, capable of acting as a metronomic presence in the heart of the park for both club and country.

This quality would surely suit van Gaal, who will be acutely aware that his current midfield orchestrator, Michael Carrick, will be 34 when the new season starts.

The Red Devils have also been linked with other midfield options such as Morgan Schneiderlin [Metro], Axel Witsel [Mirror] and Geoffrey Kondogbia [Daily Mail] ahead of the 2015-16 campaign.