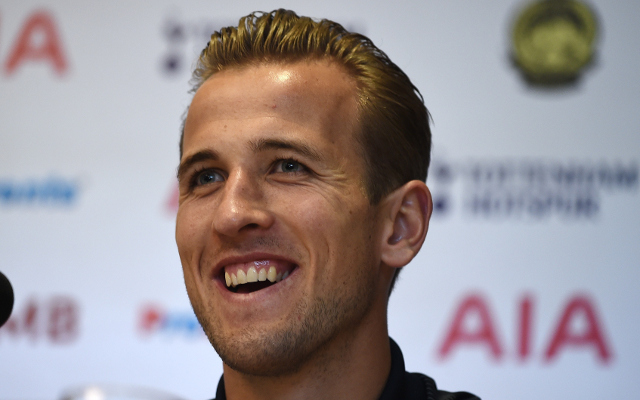 Harry Kane has responded to transfer speculation linking him with a move to Manchester United by confirming that he is only considering a future with Tottenham Hotspur at the present time.

In an interview with BBC Sport, the England international admitted it was flattering to be linked with the Red Devils, but indicated that he was only focusing on a future at White Hart Lane.

“I am happy at Spurs and I look forward to the future with Spurs,” the striker began, “I have seen there is interest but that’s all I know. It is flattering for other clubs to maybe be interested.”

The news should come as some reassurance to Spurs fans who have seen many of their beloved heroes depart over the years.

The likes of Sol Campbell, Luka Modric, Michael Carrick, Gareth Bale and Dimitar Berbatov have all left the club to move in search of silverware, and Lillywhites fans—who have taken Kane to their hearts—would not want to consider the prospect of a future without their star striker.

It seems there is little chance of that happening, at least not imminently, with Kane arguing that Spurs are one of the country’s ‘big clubs’.

The forward is currently for action for England’s U21s at the European Championships in the Czech Republic, and was present on Thursday as Gareth Southgate’s side lost their tournament opener 1-0 to Portugal.

Kane was one of the revelations of last season, finally delivering on a Tottenham career that hadn’t previously hit the heights.

He largely compensated for the failings of Roberto Soldado and Emmanuel Adebayor, scoring a remarkable 31 goals for Spurs in all competitions.

He was rewarded with a senior call-up—and he scored on his debut vs. Lithuania—while also winning the PFA Youth Player of the Year.

However, his showings have come at a cost, for Tottenham fans at least, with United believed to be planning a mammoth £40 million offer for the forward [Daily Mail].

If the Red Devils were to make their interest concrete, it would be interesting to see whether Spurs could be tempted to do a deal.