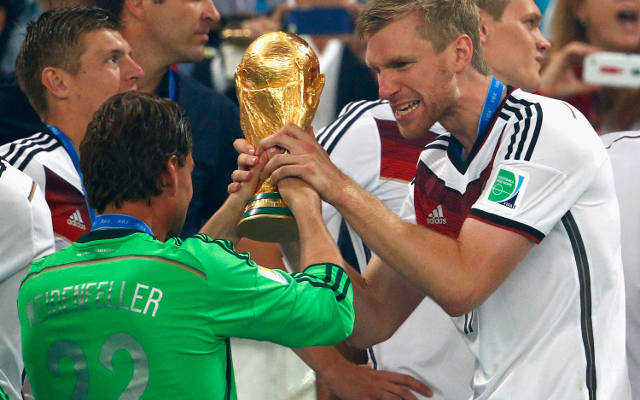 Per Mertesacker could return to the international stage next year after reports in Germany have revealed that he could play for the national team at the 2016 Olympic Games.

BILD: Philipp Lahm & Per Mertesacker may come out of international retirement for #Rio2016, if #GER reach #EuroU21 semi-finals to qualify.

The Arsenal defender retired from international football shortly after winning the World Cup last summer in Brazil, but could make a U-turn should his country qualify for the Olympics in Rio next year.

In order for that to happen, the German team must reach the semi-finals of the UEFA U-21 European Championships which are currently being held in the Czech Republic.

Mertesacker, along with Bayern Munich captain Philipp Lahm, are understood to be both considering coming out of international retirement to provide experience to what would be a youthful squad.

The rules behind picking a squad for the Olympics is that only three players that are over the age of 23 can be called up and that would mean the two World Cup-winners take up two spots.

Mertesacker admitted [via Mirror Sport] that he struggled to find his best form immediately after last summer’s tournament but recovered during the second half of the season to lead Arsenal to FA Cup glory once again and he scored the third goal in the final against Aston Villa.