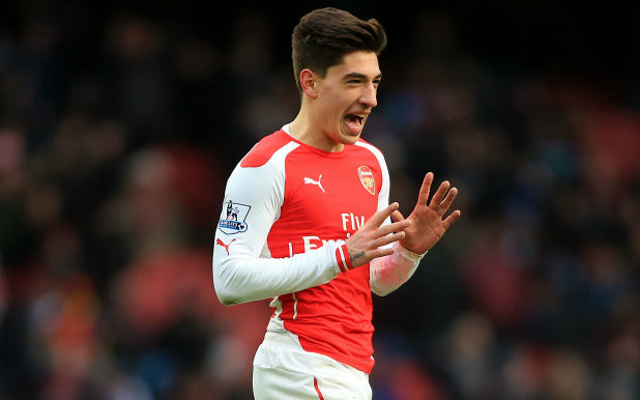 Chelsea midfielder Cesc Fabregas may not loved by sections of the Arsenal faithful at the moment, but he is one of the reasons behind Hector Bellerin’s rise to stardom.

The young Spaniard has made great strides since the turn of the year and has slotted into the right-back spot with ease and was rewarded with a start in the FA Cup final against Aston Villa last month.

Bellerin’s rise into the first team can be compared to that of former Gunners playmaker Cesc Fabregas, who also joined the club from Barcelona and went on to become a firm favorite with the fans -until joining the Blues last summer.

Speaking at Arsenal’s new home kit launch on Monday night, Bellerin said that seeing his fellow Spaniard succeed at such a big club gave him the confidence to follow in his footsteps.

Watch the video with ArsenalFanTV below:

Two long-term injuries to Mathieu Debuchy during the season handed Bellerin the chance to stake his claim to become the club’s first choice right-back and he grabbed the opportunity with both hands.

In addition to his cup final appearance, one of his two Premier League goals came against Liverpool at the Emirates to further highlight that he can handle the big game occasions.

Next season he will have to maintain his good form in order to avoid the tag of a ‘one season wonder’.