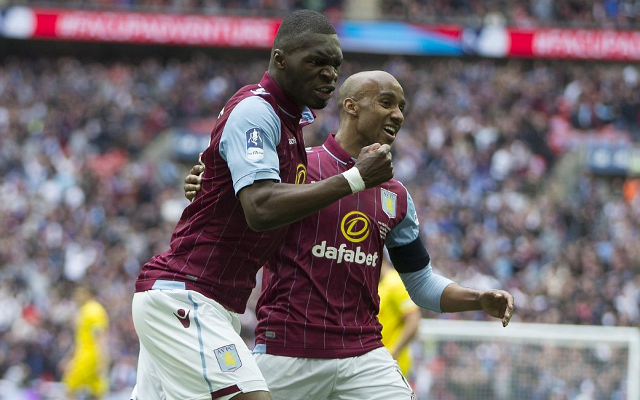 Houghton told talkSPORT that the Belgian international is a player the Reds are looking to bring in, and that he believes the player would be an ideal fit up front for Brendan Rodgers’ side, offering them just what they’ve been lacking in that position.

Benteke scored 15 goals in all competitions this season, continuing to enhance his reputation as one of the best centre-forwards in the country despite having a long spell out injured.

In total, the 24-year-old has hit 49 goals in 99 appearances for Aston Villa, and his prolific form in England has seemingly convinced Houghton that he could cut it at Anfield, as he told talkSPORT: “I’ve heard Benteke is one of their major priorities in the summer, he is the one they are looking to sign.

“Benteke would fit into Liverpool’s style. He’s big and physical and he’s something Liverpool haven’t got at the moment. He can upset defenders, he’s got genuine pace and, when you get him in the right frame of mine, he can score goals.

“That’s something Liverpool have been missing.”

It remains to be seen how much Houghton’s claims of inside knowledge will prove to be true, but there’s certainly a good argument that Benteke would be absolutely ideal for Liverpool right now due to their situation up front.

Losing Luis Suarez to Barcelona has proven a major blow, with the Uruguayan’s 31 goals of 2013/14 proving hard to replace as new signings Mario Balotelli and Rickie Lambert have performed poorly, while Daniel Sturridge has also been below-par due to missing so much of the season through injury.

talkSPORT add that Benteke has a release clause of £32.5m, which certainly looks good value for money for a proven goalscorer at this level, who will surely be keen to move to a bigger club after a season battling relegation for Villa.