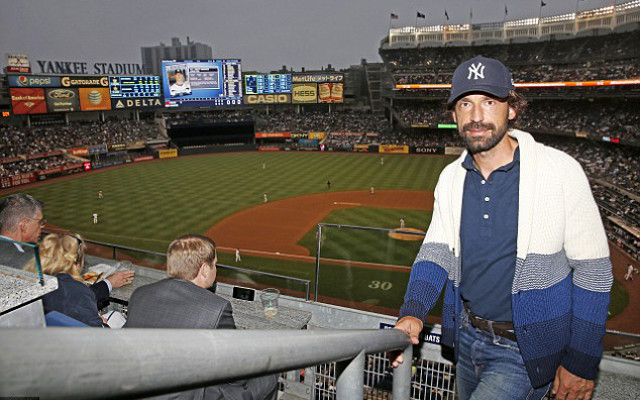 The Juve legend has reportedly decided to end his European career and is seeking a new adventure in the States.

Juventus midfielder Andrea Pirlo has fuelled speculation that he is on the brink of sealing a transfer to MLS franchise New York City FC after being snapped at the Yankee Stadium on Saturday evening.

The 36-year-old looks poised to join ex-Barcelona striker David Villa and Chelsea icon Frank Lampard at NYC FC, according to the Daily Mail.

Pirlo was in the Big Apple to watch the New York Yankees in baseball action over the weekend, and was pictured wearing the club cap, while also later spotted with NYC FC CEO Ferran Soriano.

On Saturday the New York Post claimed that the Italy international could have his move to the MLS side confirmed next week after snubbing a move to the Premier League with Liverpool having been keen on his signature.

If the midfield maestro does move to the States this summer – teaming up with Lampard and Villa – NYC would certainly have one of the most exciting teams in America, as the MLS’ popularity among the game’s biggest names continues to rise.

Chelsea legend Didier Drogba was another player said to be considering a move to the US after his Stamford Bridge contract expired, but is rumoured to have rejected a two-year offer from Orlando City [via Fox Soccer].