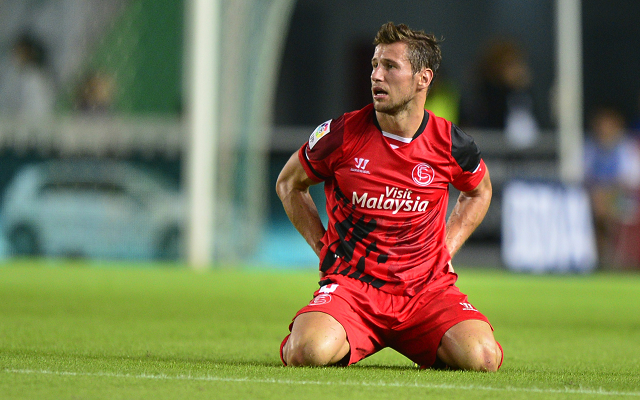 Manchester United and Arsenal will have to meet Sevilla star Grzegorz Krychowiak’s £21 million release clause if they want him to push for a move, reports the Daily Mail.

The 25-year-old is apparently keen to play in the Champions League with his current club after qualifying for it by winning the Europa League last season – the final of which he scored in. However, the Premier League giants have different ideas, and although it wouldn’t be with his current team they can both offer him playing time in Europe’s premier club competition.

A solid defensively minded midfielder, both the Gunners and the Red Devils look in need of his kind of player. Arsene Wenger has seen Francis Coquelin come to the fore in the role over the past six months, but could still get a player to play alongside the 24-year-old as he attempts to challenge for the Premier League title next time round – as the Daily Telegraph reported him admitting was his aim last month.

Meanwhile United boss Louis van Gaal apparently wants a tough tackling centre-mid to play alongside either Michael Carrick or Daley Blind in the middle of the park. With heightened expectations in the Premier League and extra games from the Champions League next time round, the Old Trafford outfit also need extra bodies in the position anyway.