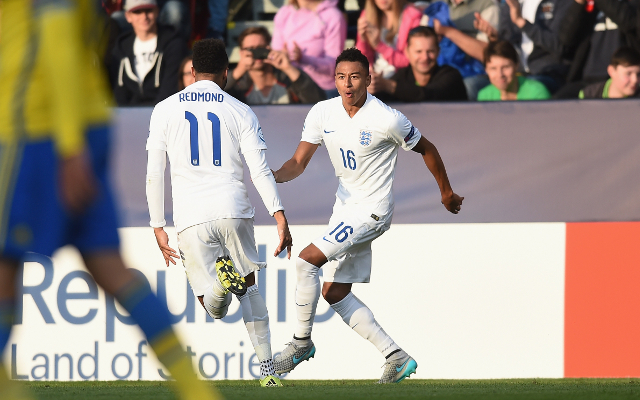 England U21 match winner Jesse Lingard had some strong words for critics of the national team after scoring the only goal of the game against their Swedish counterparts on Sunday afternoon.

The Manchester United starlet broke the deadlock in the 84th minute with a stunning volley from the edge of the area to ensure the young Three Lions still have a chance to qualify for the semi-finals of the U21 European Championships.

Speaking to BT Sport afterwards, the attacking midfielder said bouncing back from their opening day defeat by Portugal was the perfect way to silence the doubters:

“We knew we needed to win and that has shut a lot of critics up, to be honest.”

“We had the team spirit and heart to win the game and we showed we can grind games out. I was free on the edge of the box and that’s what first came on to my mind, to shoot., Sweden set out well but the goal killed them,” he added.

Lingard will be hoping to further impress during the tournament in the Czech Republic as he sets his sights on being apart of the first team picture at Old Trafford next season.

The youngster was named in the starting XI for Louis van Gaal first game in charge of the Red Devils last season, but was stretchered off after 24 minutes against Swansea City and was then ruled out until January [via Manchester Evening News].

After making a full recovery from injury, he spent the last few months of the campaign on-loan at Championship outfit Derby County [via BBC Sport], but was unable to guide them to the Premier League.

He could soon be reunited with his manager at Pride Park in Steve McClaren, as reports via Independent Sport suggest the recently appointed Newcastle United boss is interested in taking the 23-year-old on loan next season.