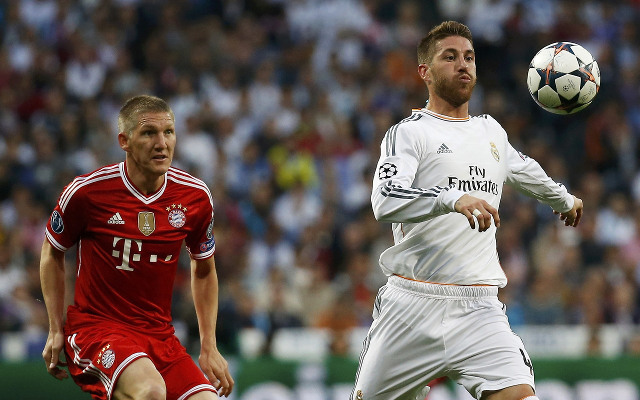 There has been intense speculation that Manchester United are eyeing Real Madrid’s Sergio Ramos and Bayern Munich’s Bastian Schweinsteiger this summer, and their interest has been confirmed by reliable sources.

BBC Sport and Sky Sports have both reported their understanding that the Premier League giants have put the World Cup-winning duo at the top of their transfer wish list.

The weekend saw Spanish newspaper AS claim that Los Blancos defender Ramos had decided he wants out of the Santiago Bernabeu this summer, and the Red Devils were considering a swap deal involving David De Gea to land the Spaniard [via The Guardian].

Meanwhile, Bayern’s Schweinsteiger has been heavily linked with a Louis van Gaal reunion next season over the past few weeks, and it was claimed that informal talks over a move to Old Trafford have already been held [via the Daily Star].

The Germany international’s contract at the Allianz Arena expires at the end of the 2015-16 season, and the midfielder could therefore be available at a cut price if Pep Guardiola opts to sell the 30-year-old this summer.

According to Sky Sports, van Gaal has made a defender, a midfielder – with similar style to Michael Carrick – and one striker his main transfer priorities in the market.

Another summer of huge activity at the Theatre of Dreams is therefore expected.