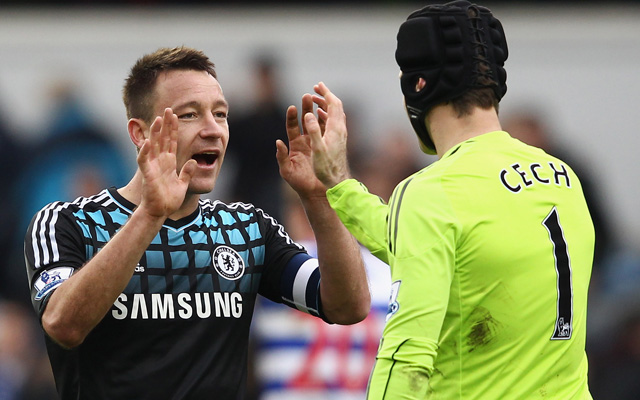 Chelsea captain John Terry has had his say on Petr Cech’s reported move to Arsenal.

The Czech Republic international looks set to complete a move to the Gunners in the coming days following reports on SkySports over the weekend that he has agreed terms.

A fee is yet to be agreed between the two London rivals, but it is understood that Arsenal have rejected the proposal of allowing one of their homegrown stars to move in the opposite direction.

If the deal does go through it will represent a major piece of business for the FA Cup holders and Terry, who has played in front of Cech for the last 11 seasons, believes the North London are getting a world class keeper:

“There’s talk of Arsenal signing Petr Cech and, if they do get him, he will strengthen them for sure. He will save them 12 or 15 points a season,” the Blues skipper told talkSPORT [via Mirror Sport].

Cech lost his battle for the number one jersey at Stamford Bridge last season to Belgian youngster Thibaut Courtois and Terry has praised the 33-year-old’s attitude over the course of the campaign:

“Petr was an unbelievable professional last year. When you get left out of the team it can be hard to accept but, when he came in [to the side], he was exceptional.”

“He deserves a lot of credit for that. We understand he wants to play first-team football but nobody wants to see him leave the club. He’s going to be sorely missed and will improve any side he goes to,” Terry added.

In his time in West London, Cech won every single major honour available to him and is set to leave the Bridge after claiming his fourth Premier League winners medal last month.